The Jewish comedian President and defender of Ukraine against Putin's Russia

Seen as a hero figure within Ukraine and around the world, this unassuming comedian has become the rallying figure for the defence of Ukraine against Vladimir Putin’s invasion.

Born into a Jewish family in 1978 in Kryvyi Rih, which at the time was part of the USSR, his father was a professor and computer scientist whilst his mother was an engineer. His grandfather fought for the Red Army in the second World war whilst his great grandfather died in the holocaust. In 2003, he married his school sweetheart Olena and have two children.

He received a law degree in Ukraine but decided to take a different path, joining a team of comedians and touring the region whilst producing TV shows, before going on to star in many feature films. One of his best-known roles and now top of Netflix in Ukraine was as star of ‘Servant of the People’ where he played the role of a humble teacher that became Ukrainian President.

In 2018, his production company registered ‘Servant of the People’ as a political party and the stage was set for Zelensky to become president.

He was inaugurated on 20th May 2019 becoming the first Jewish head of state outside of Israel. His mission was to reform Ukraine whilst reducing the power of the Oligarchs.

He came to international prominence when President Trump blocked a military aid package due to Hunter Biden’s relationship with a Ukrainian natural gas company.

In April 2021 with Russia beginning its military build-up on the Ukrainian border Zelensky appealed for rapid membership of NATO, this was in effect declined for fears of upsetting Russia.

The build-up continued until February 2022 when Russia began its operation to ‘de-nazify Ukraine’. Since then Zelensky has been the target of numerous assassination attempts, has become the international hero figure for the defence of Ukraine and even been copied by other international leaders. 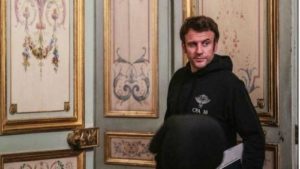 What the future holds is unclear, the bloodshed in the Ukraine shows no sign of stopping and Zelensky is still holed up in Kyiv which grows more dangerous each day.

It’s a victory when the weapons fall silent and people speak up. Volodymyr Zelensky