The App deciphers the undecipherable language of food and cosmetics labels

We are constantly being reminded that many of the products from brands that we have historically relied upon may contain harmful toxins and ingredients that could have a detrimental effect on our health.

E-numbers, mercury, palm oil and Bisphenol A are just a few of the harmful ingredients that can be found in supermarket food. That’s not to mention high sugar, salt and fat content.

Then there are the cosmetics that we slather all over our bodies. Similarly, many of the biggest brands we have come to trust contain ingredients that can be damaging from the outside in, with ingredients including sulphates, parabens and polyethlene.

When French father of three Benoit Martin decided that he wanted to feed his family with only the best foods, he was struck by a similar obstacle: food labels are near on impossible to decipher, what with their long list of unpronounceable ingredients hidden amongst the small print.

He realized how helpful it would be to have a tool that would automatically analyze each product’s ingredients.

Benoit talked with his brother François Martin and a friend, Julie Chapon, about the idea, and they loved it. In 2016, the three of them took part in the Food Hackathon, a competition for startups. They spent an entire weekend developing the concept and won first place. Convinced that their idea filled a real need, they threw themselves into the project.

In the beginning, the tool they visualised wasn’t an app. They thought it would be a connected object shaped like a carrot that users could stick to the fridge. A few months in, they realized that a connected object wouldn’t completely solve the problem, and due to its price tag it wouldn’t make product analysis accessible to all. They dropped the idea in favour of a mobile application and Yuka was born.

Yuka is a free mobile app that allows you to scan the barcodes of food and personal care products and instantly see their impact on your health by using colour coding from green to red. A rating and detailed information help you understand the analysis of each product. 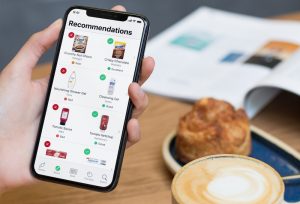 When a product has a negative impact on your health, Yuka recommends a similar, healthier alternative.

It now has more than 10 million users and is available in 4 other countries: Belgium, Switzerland, Luxembourg and Spain and on 24th June 2019 Yuka launched in the UK.

In the beginning, the Yuka project relied on Open Food Facts, an open, collaborative database that uses the same model as Wikipedia.

In January 2018, Yuka decided to create its own database in order to implement advanced systems for monitoring and verifying each addition.

They are continually growing their database with contributions from users, who can enter information directly into the application for any products that aren’t recognized by Yuka and from certain brands that are willing to provide us with direct access to their product information.

The App’s database is also built from a completely impartial algorithm that no brand can influence.

Yuka is essentially financed through the premium version of the App. This is a paid version (€15/year) that gives you access to additional features: offline scanning, a search bar so that you don’t need to scan your product to find it and also an unlimited product history. They also sell a nutrition programme through their blog aiming to teach the fundamentals of nutrition within 10 weeks.

Currently, Yuka recognises 70 percent of the products available in the UK, but with the help from British users, they will be able to fill the 30 percent gap as they upload pictures of labels that have not yet been obtained by Yuka.

Yuka is now planning its next launches in the USA and Canada for October 2019.