Felix Böck describes himself as “just a carpenter with an engineering degree.” But unlike many carpenters or really anyone else in the world, Felix has created a viable, sustainable business out of recycling chopsticks.

Born and raised in Bavaria, in the southern part of Germany, Felix’s obsession with wood comes from “not knowing anything else.”

Regardless of the “pick your trade” attitudes of the education system at the time, “working with wood has always been a very natural thing for me and I always wanted to become a woodworker,” he said.

Leaving school after Grade 9, Felix went into a carpentry apprenticeship becoming a fully certified joiner by the age of 18.

Being the first in his family to graduate University, he admits that he “never really understood the concept of studying,” but feeling the pressure to “make something of himself” and being surrounded by friends off to uni he came round to the idea of expanding his knowledge of the material he loved.

A google search for universities that had woodworking programmes on his first-ever computer led him to apply for a technical wood engineering course at Rosenheim University close to Munich.

In his second year of studies, Felix got his first job offer full time in Ethiopia working as head of product development with a startup that worked with bamboo. Ethiopia has a huge challenge of deforestation, but the county did not count bamboo as part of the forest solutions.

“We were trying to improve the image of bamboo as it is often known as “the poor man’s timber, especially in South America and Africa, because bamboo is not a very commercialised plant.

There [Ethiopia] I got to try loads of different ways of using bamboo as a substitute for wood engineered panels or products. We developed furniture boards and flooring — any kind of tough engineered materials made out of bamboo fibres.”

Fast forward to 2016: Armed with a sense of social responsibility from working in Ethiopia (while simultaneously finishing his degree), expertise in working with bamboo, and a stint at a large engineering firm in Germany — Felix is recruited by the University of British Columbia (UBC) to do a PhD as part of a research collaboration on structural bamboo with MIT and the University of Cambridge.

Experiencing a frustrating slump in passion partly caused by the North American wood industry’s aversion to inner-city resourcefulness — the idea for ChopValue was conceived.

Then in their micro-factories, the chopsticks are cleaned, sorted, pressed and transformed into engineered bamboo tiles — the puzzle pieces used to create ChopValue’s chic furniture and homeware for retail and custom designs for companies.

To date, Felix estimates that ChopValue has given new life to 25 million chopsticks. Owing to the beauty of the items the startup creates from the humble chopstick — ChopValue has been cashflow positive from day one far exceeding their target of making 1 million in revenue in 2019.

Looking to expansion Felix has decided to take ChopValue down the franchise route in 2020, which he says will allow the company to expand to 50-75 locations over the next 3 years while maintaining carbon neutrality.

To do this he developed the concept of micro-factories in order to maximize production efficiency while minimizing environmental impact.

This means that anyone anywhere with access to an abundance of used chopsticks and an interest in creating a profitable, sustainable business could set up a branch. 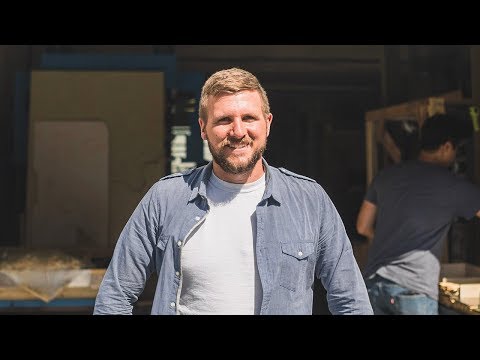