Elizabeth Nava Garcia is the founder and commercial director of Entelequia, a Mexican company dedicated to the production of biodegradable disposables, which aims to avoid plastic waste in the food and drinks sector.

Glasses, plates, cutlery, napkins, straws, stirrers, bags are just some of the products offered by the company through its catalogue that stands out in the market for being the largest in Mexico with more than 150 products available made from wheat, cornstarch, sugar cane and cellulose.

She became concerned about the environmental effect of plastic while studying at the Tecnológico de Monterrey University, Campus Toluca. She was frustrated by the amount of unicel and single-use plastic being widely used.

She proposed different initiatives to eliminate the use of polluting plastic in her school. These were successfully implemented in the campus.

“To be a complaining entrepreneur is to take responsibility for the problem and solve it with an innovative project.”

The biodegradable packaging created by Entelequia resists moisture and grease, are capable of withstanding high and low temperatures, can be used in microwaves and take approximately 90 to 180 days to degrade, while a conventional plastic product takes around 100 or 1,000 years in disintegration.

The company personalizes and prints the products according to the needs of each client with water-based inks, which are friendly to the environment compared to those made with oil.

In 2018, Garcia won the National Entrepreneur Award in the category of ‘Woman Entrepreneur’ 2017, the most relevant business and entrepreneurship event in the country.

She was instrumental in the success of E6PR, a company that created the world’s first plastic-free, edible and biodegradable 6 pack ring for beer and other canned drinks.

The product was created for California-based Saltwater Brewery and has now been adopted by many other beer brands. 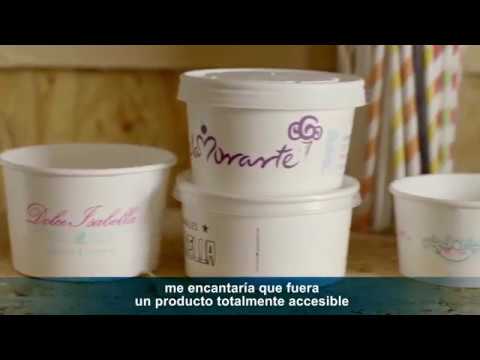