Dolores Huerta has been described as “one of the most important, yet least known activists of our time,” and “one of the most defiant feminists of the 20th century.” At 89 years of age she remains every bit as determined to continue fighting for workers’ and women’s’ rights as ever.

Born in New Mexico, USA, to a migrant worker passionate about union organising and a community-focused businesswoman, Huerta became a co-founder of the first farm workers union, The National Farmworkers Association. It was through this organisation — now known as the United Farm Workers — that she organised one of the most famous labour strikes of the past 50 years, the Delano grape strike in 1965. Huerta was then responsible for negotiating the workers’ contracts after the action.

Her non-violent, spiritual stance empowered her to take on roles traditionally held by white males. She lobbied for improvements to the lives of farm workers, including an extension of a federal aid programme to California farmworkers. And In 2002, she founded the Dolores Huerta Foundation. All of this — chronicled in multiple films and documentaries — was done while she had 11 children.

She’s won a litany of awards, including the Presidential Medal of Freedom; an honorary degree from Princeton University; and a position as the first ever Latina to be welcomed into the Women’s Hall of Fame. In California, where she did much of her work, April 10 is Dolores Huerta day.

Despite — or maybe empowered by — her age, Huerta remains an active presence on social media. She tweets in support of favoured candidates in the US elections, and continues to act as a community leader to bring people together for a bright future.

In one twitter video, she tells the story of her famous phrase, “Si se puede,” which continues to be used as a call to action by the Latino community and heard at sports matches. “When I worked with the United Farm Workers, we were doing a campaign in Arizona way back in 1972 where they had passed a law that made striking illegal, and if you said the word boycott you could go to jail for six months. So we were organising people to try to change that law and get the Government not to sign it. Unfortunately they did sign it but during the campaign I was living with a group of my male friends. Most of them were professionals — attorneys, had different offices in Arizona. I was asking them: please come and support us on this campaign, we need to stop this terrible law. But they kept telling me, “No se puede,” which in Spanish means ‘No, you can’t.’ You can’t do in Arizona what you did in California. My response to them was yes we can, “Si se puede!”

She adds that she corrects people about being the creator of the phrase, because women “do not often get the credit for what we do.” She said former US President Barack Obama apologised for taking the English version of the phrase for his election campaigns — “Yes we can.”

Huerta is quick to make parallels between current issues and those that abounded when she started community organising in the 1950s. “When you think of the struggles that labor unions are having today, when they have passed so many laws that make it very difficult for labor unions to organize, for one, and not just the farm workers, but all of the labor unions at the national level,” she told the LA Times,

In an interview with Al Jazeera, she also set out a strong and sensitive argument on support for immigration. She said that the US is a country built by immigrants, who still “do the heavy lifting” in the US — construction, restaurants, taking care of children, social care, picking food. She says part of the problem is that US companies go into Mexico and Central America and put their businesses there, taking profits out of the country instead of letting profits stay there. She says that a new model is needed.“If we can use kind of the Marshall Plan mentality to help these other countries, instead of colonizing or economically colonizing all these other countries, I think we would have better partners, people would like us more, and we could really help.

“People are never going to stop coming to the United States until we can erase some of these inequities that we have.” 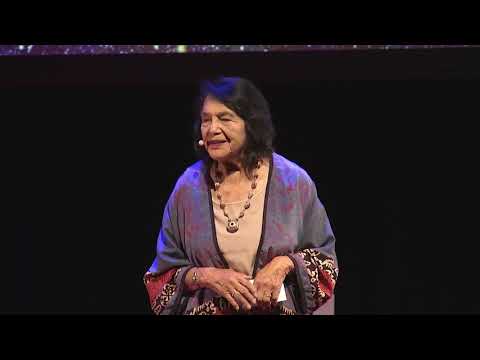