Photo by Nathalia Segato on Unsplash
Photo by ifnotusthenwho

When some people speak, you have no choice but to listen.

That’s the power coursing through David Popygua, a Brazilian Guarani.

The indigenous activist and tribal leader came to public attention this summer amidst raging fires, rampant deforestation and complete political disregard for the Amazon.

Attacking the status quo at an anti-deforestation protest in Brazil, Popygua said: “Indigenous people make up 5% of the global population. Indigenous people protect 82% of the world’s biodiversity.

“They say that’s too much land for so few Indians,” he rallied out. “But it’s too few Indians protecting life so that the world world survives.”

Since Brazil’s far-right leader Bolsonaro came to power, the equivalent of three football fields’ worth of forest has been cut down every minute. Money, and in some cases access to electricity, have been funnelled towards indigenous communities to convince them to give up their land to commercial interests.

Popygua expanded his views in an interview with Reuters. “Our families are in danger, our children are under threat, our people are feeling attacked,” he said. “In the name of what is called ‘economic progress’, they want to kill our people.”

According to Jornalistas Livres, Popygua’s clan occupies just 1.5 hectares in the Jaraguá Park, to the west of Sao Paulo, making it the smallest amount of tribal land in the world.

The organisation described him as a “warrior aware of current risks”, and as someone not only challenging the Government but also challenging the “brutal offensive of evangelical missionaries.”

“They want to tear our soul out, to set one against another, a father against a son, a son against a mother,” he said, adding a belief that only ancient culture, built before European settlers arrived, can help mankind survive. 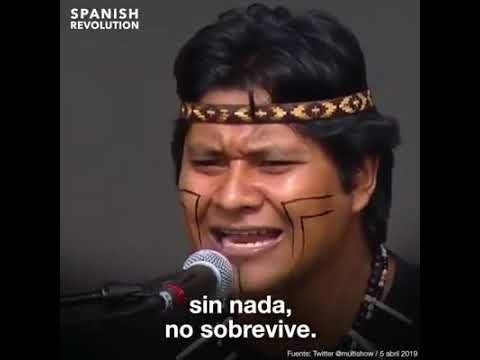