Photo by Rachel Jarboe on Unsplash
Photo on psocialista

Leader of the Fridays for Future Movement in Argentina, 19 year old Bruno Rodriguez is a political science student at the University of Buenos Aires. He’s a fearless advocate for social change, as unafraid in rallies as on live TV interviews and UN panels of calling out systemic inaction by national governments — or pointing blame at the fossil fuel industry for “pillaging” across Latin America.

“Our world leaders have the obligation to make radical change,” he was quoted as saying in Plant Based News. “But change rarely takes place from the top down. It happens when millions of people demand change.”

“I come from a country in Latin America,” he said in the meeting. “The history of our region is five centuries of plunder. For us, the concept of ecological and environmental justice is linked to Human rights, social justice and national sovereignty over our natural resources.”

Rodriguez has stressed that nothing is achieved without a fight, and that very often it’s necessary to mobilise, take to the streets and to fight in parliament. He also designated corporations as “responsible for 71% of the gas emissions in the atmosphere that generate climate contamination.”

He continued: “We have to stop urging political leaders to listen to scientists, but instead we need to demand that they take action.”

Rodriguez said his involvement in the climate strikes came after studying protests erupting across Europe, and seeing that there was no similar form of protest in Argentina. Ahead of global protests in March, they organised an event thinking not that many people would turn up — finding instead that 5,000 young people joined the marches in front of Congress.

This strength also came across in a live interview on Television Publica Argentina, where he added that the situation facing people in Argentina and around the world is “catastrophic” — and that victims of climate change are often the most vulnerable.

He said that in Argentina, there’s only ‘symbolic’ interest in addressing the catastrophe of climate change.

“We sign agreements, we ratify them, but later, when national politics materialises, we don’t see results.”

The young activist is clear that on a personal level, there are many things that people must start to do to limit their impact on the world — everything from recycling habits to personal food choices. “But without national politicians, without the political class taking responsibility for the issue, we won’t be able to achieve anything.” 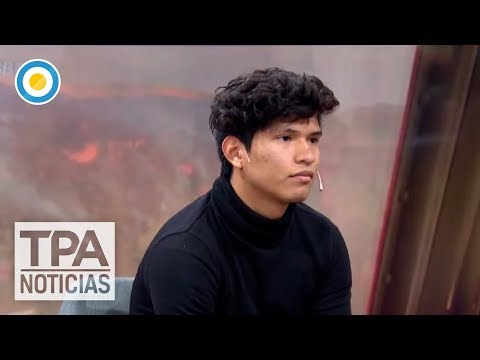