The activist believes Ndanifor Ecovillage is a model for promoting peace, fair trade and sustainable development across the whole of Africa.

Deep inside Cameroon — beyond the heady sprawl of the capital, Yaoundé, and up from the Mungo river and volcanic Mount Fako — lies Ndanifor, a village with ambitions to change the world.

Developed by environmental activist Joshua Konkankoh some 20 years ago, Ndanifor is a place where every building is made from local, responsibly-sourced materials. Food in Ndanifor is farmed naturally using time-honoured traditions; young people can find employment in the community; ancient culture is happily celebrated.

But Konkankoh believes this ‘ecovillage’ project has the potential to do so much more. He thinks it can be scaled up to cover the 80,000 people living in the local Bafut region. He even thinks it can serve as a model for tackling some of the biggest challenges in Africa — among them environmental destruction, internal displacement, high rates of emigration and an unbalanced relationship with the Global North.

Joshua Konkankoh: A lifetime of action

The activist has dedicated his life to promoting sustainable, community-driven growth.

As a young man, he raised money to buy a patch of land in the slums of Yaoundé and set up a community garden. Young people attended, creating a space that they were actually in control of for the first time in their lives. “From this concept of living off the land and the rite of passage, they were actually saying that a better world is possible in a slum in the city,” Konkankoh told German site Die Welt.

In 1996, after a long period working for the Cameroon Government, Konkankoh expanded the community garden concept by setting up Better World Cameroon — an NGO focused on developing regenerative agricultural practices across the country.

Konkankoh is open about the challenges facing Cameroon. He describes it as a place with crushing food insecurity, despite being the “breadbasket” of the Central African Region. A country struggling through a long-term conflict between its English and French speaking regions, which has forced more than 500,000 people from their homes. A country that young people flee because of the lack of jobs and increasing palm oil-related deforestation.

But the bright, optimistic figure is more than sure that it doesn’t have to be this way. “The young constitute a formidable force, and they can be reconnected with their land, their roots, their culture,” he said.

“How can we accompany communities who want to change their own way,” he added in a radio interview. “To make people have the lives they want?” 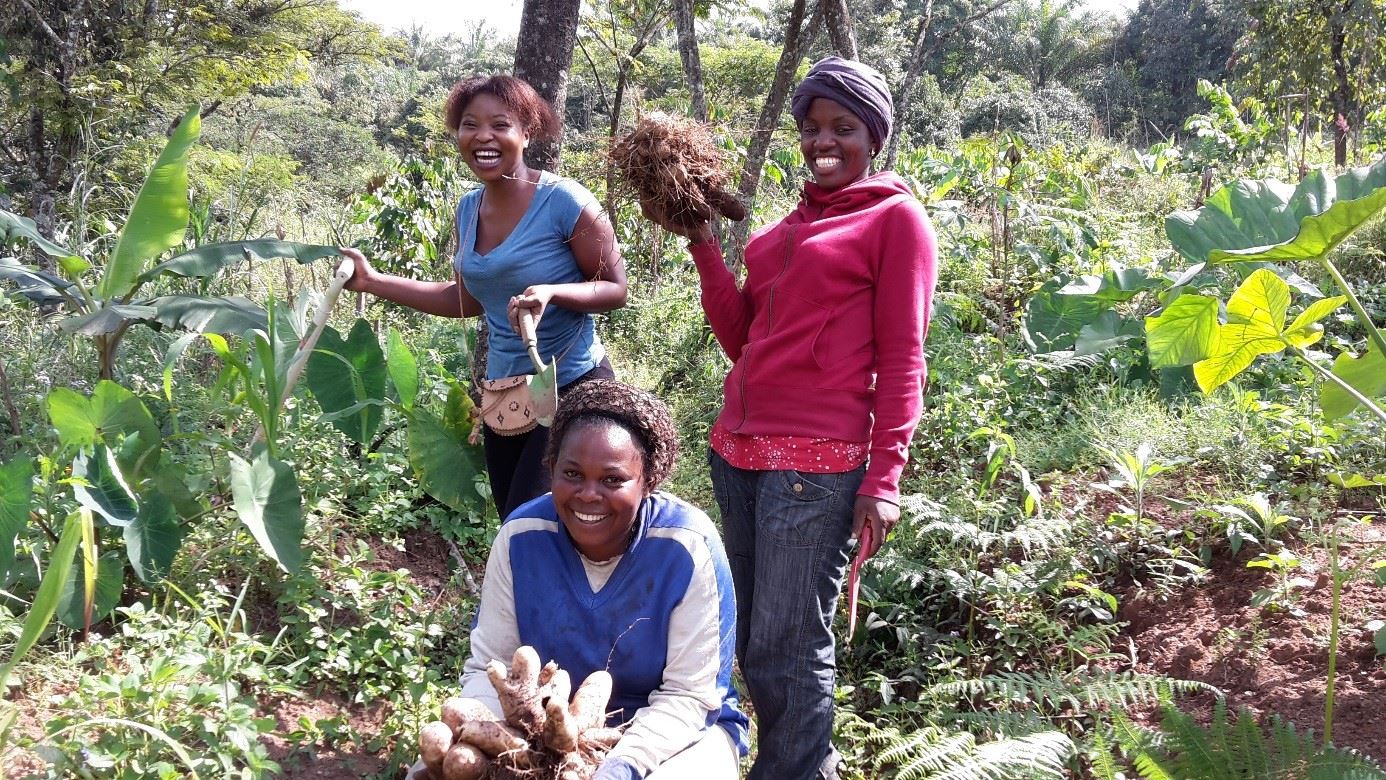 His answer was Ndanifor permaculture ecovillage.

As set out by the Global Ecovillage Network (GEN), ecovillages are participatory, locally-managed communities in rural or urban areas that are designed to regenerate social and natural environments. There are more than 10,000 projects around the world.

What’s key is that the villages are committed to doing more than just planting trees. “Preservation and restoration of nature can only succeed when the social fabric is strong, cultural heritage is celebrated and people find ways to marry their love for the planet with their need to make a living,” GEN writes.

In Bafut, much of the focus is on greening local economies. The ecovillage inhabitants:

“Most of the native forest is gone,” Konkankoh told Global Shakers. “We are trying to stop what has happened elsewhere with this eco village.

“So that people can realise that instead of doing away with this green, creating problems like erosion, we can do it differently, conserve most of the green, and still integrate the green [areas] with eco buildings.”

Joshua Konkankoh added to GS that his aim is to expand the Ndanifor model to cover the 340km2 of the entire Bafut kingdom, which is home to around 80,000 people. He wants to support the area through a transformational peace leadership process and “serve as a tool for change in the Cameroon crises and other troubled spots in Africa.”

Ndanifor is well placed to achieve this goal: Bafut is a region where the traditional fondom (kingdom) and modern local council operate in tandem. With a foot in both camps, and after experience collaborating with ecovillage projects in Germany, Scotland and Portugal, Konkankoh has been able to build broad political support for Bafut’s transition to an eco-city.

The activist also wants to use Bafut to change the relationship between the Global South and the Global North. In an interview with Terranova voice, he stressed that Africa must not lose its youth “to the western dream”, and expressed concern that barriers between countries effectively mean that progressive projects across Africa hardly know each other. His solution? To connect “the youth of the West and the youth of the developing countries.”

Konkankoh is similarly enthused about the possibilities for ecovillages to “build capacities for peace, ecotourism, and fair trade,” and to address what he sees as the failures of the Sustainable Development Goals to empower local communities.

In short, he just wants to make life worth living for as many people as possible.

“What I find is that when we build trust and build bridges through this project, then we are in effect creating a better world,” Konkankoh concluded in a YouTube video.

Better World Cameroon is organising a Symposium in Alentejo, Portugal, in the second week of April 2020 to open a space in Europe for a “Mundo Melhor” using an African model of Social Ecology Entrepreneurship & Partnership. For more details, contact Better World Cameroon.