Waymo LLC, the Alphabet Inc subsidiary, is now producing vehicles that can drive themselves out of their Detroit plant.

“We’ve just opened the world’s first dedicated autonomous plant,” John Krafcik, Waymo’s CEO said during an interview at Forbes Under 30 Summit at the Masonic Temple in Detroit on Monday. “We call it a factory.”

“In the heart of Detroit, MI we’ve opened the world’s first factory 100% dedicated to L4 autonomous Driver integration. Our factory recently completed 30 I-PACES that are now in CA for development and testing.” –@johnkrafcik @Forbes #30Under30Summit pic.twitter.com/MmntZLiVX4

As defined by the Society of Automotive Engineers, the automation spectrum goes from Levels 0 to 5, from no automation to full automation, in which a human need never operate the vehicle and it can drive practically anywhere.

“From our perspective at Waymo, a Level 4 vehicle is a vehicle in which you can put a rider who doesn’t have a driver’s license or vision and they could move from point A to point B,” Krafcik said. “If you need a driver’s license, you can’t call it self-driving.”

In an article for Forbes, Alan Ohnsman, an expert in how tech is shaping the future of transportation, gently speculates that Krafcik’s comments could by a sly jibe at Tesla CEO Elon Musk, who days before made references to how soon his electric-car company would roll out its long-awaited Full Self Driving system which Ohnsman described as “optimistic and somewhat confusing.”

Musk said that a “feature complete” version of the system could be ready by the end of the year.

When asked to explain what level of capability he envisions, Musk described a system that is “autonomous but requiring supervision and intervention at times” —  this would not meet the technical definition of a Level 4 or Level 5 self-driving vehicle, as defined by the Society of Automotive Engineers and adopted by the U.S. Department of Transportation.

Waymo is loudly targeting Level 4, where the vehicle operates autonomously within a well-mapped, geofenced area and has just started doing so.

Until now, the company’s self-driving cars have had a Waymo engineer perched behind the wheel, observing the car’s behaviour, ready to take control if necessary.

Now, Waymo is confident that its tech is smart enough to drive people around on public roads all by itself. But for now, the cars without safety drivers are only operating in the company’s self-driving robotaxi fleet called Waymo One.

The service launched in December in Phoenix to a few hundred select customers with most of its Pacifica Hybrid minivans still showing up with a human safety driver.

Meanwhile back at the ranch in Detroit, Waymo has already outfitted 30 Jaguar I-PACE SUVs with the company’s autonomous driving technology. 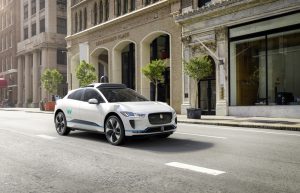 The company has also announced agreements to develop self-driving vehicles and services with Renault SA and its Japanese partner Nissan Motor Co, and has deals to use minivans made by Fiat Chrysler Automobiles NV in its robo-taxi fleets.

The vehicles made in Detroit will eventually join the Waymo One Fleet.

It is unclear how many employees Waymo has hired so far. Terms of an agreement for an $8 million grant from the Michigan Economic Development Co required Waymo to sign a three-year lease and open the facility with 100 employees by 2021, eventually growing its workforce to 400.

Krafcik has not said when or how quickly Waymo would expand “rider-only” services to customers outside of Phoenix.

Riders who signed up for the fully automated service have signed non-disclosure agreements, he said.

The company hasn’t revealed how many fully automated rides it has given, but has indicated it is still a small number.

While the company is making great efforts to develop driverless rides, on Sunday Krafcik said that driverless delivery likely has a better chance of catching on early versus passenger transportation.

This could explain why yesterday Waymo announced that it has expanded its business relationship with automotive retailer AutoNation. Waymo vehicles in Phoenix will now be used to move car parts between AutoNation’s Toyota Tempe locations and other repair shops in the area, including those run by independent third parties.

Looking to the future, the CEO has also said that “trucking is a really interesting application of the Waymo driver.”

China Has Dedicated a Mountain Highway to Test Self-Driving Cars