Thai Ha Books in Hanoi has set out several distribution points that residents can use during the COVID-19 lockdown to access 3kg rice for free.

In Hanoi, the capital city of Vietnam, residents can go to a machine and access rice at the click of a button.

It just so happens that the button is on the floor, operated by foot, and that any users must be at least two metres away from everyone else.

The catchily-named ‘Rice ATMs’ were set up earlier this month by Thai Ha Books, a Hanoi-based publisher, to counteract the crushing social toll of the Coronavirus crisis.

In late March, Vietnam temporarily suspended rice exports to ensure that it had enough food to feed its own population while most farming activity is on hold.

As businesses shut down, thousands of families in Hanoi are without income — and without necessary economic support to pay for basic necessities. 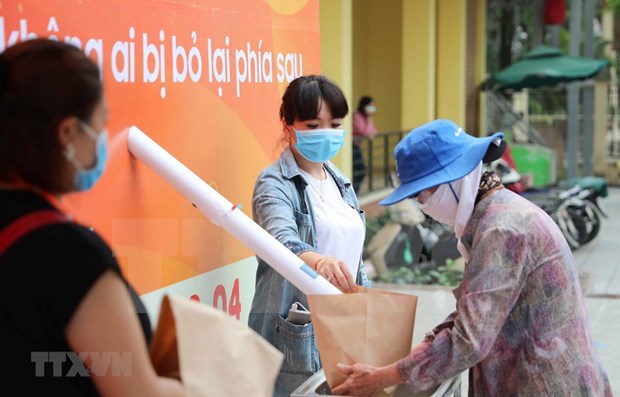 The Rice ATMs are therefore focused on supporting poor workers and people in difficult circumstances, replete with the message “Sharing Love – No one left behind.”

To use the machine, people must wear a mask, bring their own rice bags to limit environmental waste, line up with two metres of distance, and only take 3kg of rice per day.

Thai Ha funded and established the Rice ATM project, reportedly dreamt up by Hoang Tuan Anh, a director of an electronic lock company in the Tan Phu district. While there was initially enough rice to last until the end of April, community donations have ensured the ATMs will have a longer life.

The plan is to expand the ATMs across Vietnam.

In more good news, reports have emerged that Vietnam has gone several days without a new COVID infection. Much attention has been paid to strict quarantine measures put in place by the country to contain the virus.