UK MPs have united to form a parliamentary group to analyse sustainability in the clothing and textiles industry.

Recent research shows that the cost of staying fashionable is largely paid for by the planet rather than coming out of our own guilty pockets.

It takes around 7,500 litres of water to make a single pair of jeans, equivalent to the amount of water the average person drinks over a period of seven years — just one of the many startling facts about the fashion industry’s giant footprint.

It is considered by the UN Conference on Trade and Development (UNCTAD) to be the second-most-polluting industry in the world.

Therefore, action in this area is imperative to achieving the United Nations’ Sustainable Development Goals by 2030.

The latest move to addressing the polluting practices of the fashion and textile industry comes in the form of a brand new All-Party Parliamentary Group (APPG), led by chair Anne Main MP.

The APPG, which is supported by sustainability charity Hubbub, launched with an inaugural meeting last week that was attended by dozens of major retailers, industry bodies and circular economy experts.

In a statement, she said:

“I am delighted to be voted in to chair this group and I hope we can help to shine a spotlight on this important topic. We need to have a proper debate about the trade-offs of using man-made materials instead of sustainable natural products and only by seeking evidence and asking difficult questions are we going to get there.

“We know that the current situation cannot continue and I was pleased to see that this was recognised by all the guests attending the meeting. Now is the time for constructive action to make the clothing and textiles industry more sustainable. The APPG will now look to take evidence from industry and others and will produce a report with recommendations for change.

“I would encourage all parts of the industry, from farmers to retailers to industry bodies to engage with the work of the APPG as we look to bring sustainability to this important issue.” 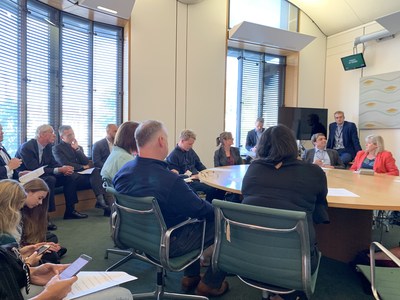 CEO and founder of Hubbub Trewin Restorick also expressed his support for the newly formed group and its goal. He said:

“We are proud to be promoting this APPG and hope that the group’s work will complement and enhance our current fashion campaigns. Creating greater sustainability in the clothing and textiles industry is increasingly important and with the founding of this APPG we hope that government policy can be influenced to deliver a real step change in how we think about what we wear.”

The move comes just a month after the government rejected all recommendations made by the environmental audit committee’s report, Fixing Fashion: Clothing Consumption and Sustainability.

In the coming months, the APPG will analyse industry evidence and make recommendations to the UK Government for action in the clothing and textiles sector.