In light of the world’s plastic problem, industrial designers and bioengineers around the globe are searching for ways to design plastic out of our lives. We are so heavily reliant on it, that we need solutions that act like plastic but without the negative impacts on the environment.

University of Sussex graduate Lucy Hughes has found a solution in the seas.

The 24-year-old from Twickenham has created a bioplastic made from red algae and organic fish waste that would otherwise end up in landfills. The invention has bagged her the prestigious James Dyson Award and £30,000 in prize money.

The fully biodegradable and compostable material, called MarinaTex, has been designed as an environmentally responsible replacement for the plastic film currently used in a whole host of packaging and a recurring offender in sandwich boxes.

It can biodegrade in a soil environment in less than a month and can be disposed of through ordinary food waste collections.

While the product may look and feel like plastic—it is apparently a lot stronger and far safer to use in conjunction with food. 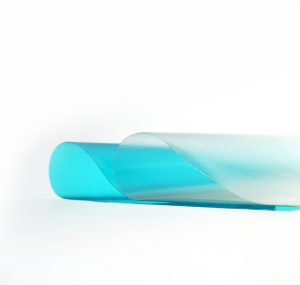 Plus, as it uses byproducts from the fishing industry, this helps to close the loop of an existing waste stream for a more circular product lifespan.

According to Hughes, one Atlantic cod could generate as much organic waste as is needed for making 1,400 bags of MarinaTex.

Seeing first-hand the amount of organic waste material produced from the fishing industry, she identified its potential to be a reliable and plentiful supply, which when combined with a biopolymer such as red algae, could create an extremely effective plastic substitute.

After around 100 different experiments to refine the material and process—Hughes had her award-winning bioplastic.

“Plastic is an amazing material, but we’re too reliant on it as designers and engineers,” says Lucy.

“It makes no sense to me that we’re using plastic, an incredibly durable material, for products that have a life-cycle of less than a day. For me, MarinaTex represents a real commitment to innovating plastic use and incorporating sustainable, local and circular values into product design. As engineers, we shouldn’t limit ourselves to designing to form and function, but rather form, function and footprint.”

Hughes had already clinched the top prize in the UK Dyson Awards, but on Thursday, it was announced that she had also beaten 1,078 others from 28 different countries for the international prize.

The annual award scheme is run by famed hoover innovator Sir James Dyson’s charitable trust, the James Dyson Foundation. The awards challenge young people to “design something that solves a problem” and is open to students and recent graduates in product design, industrial design and engineering.

Sir James Dyson said: “Young engineers have the passion, awareness and intelligence to solve some of the world’s biggest problems. The James Dyson Award received some thought-provoking ideas this year—and more female entrants than ever—making the judging very difficult.

Next steps for MarinaTex include: gaining more funding, conducting more research into mass manufacturing, developing the business plan and acquiring a patent and food-safe certifications seeing as the material is also edible

91% of Plastic Ever Produced Hasn’t Been Recycled