A team of AI and software experts from UAE have created a pair of glasses that gives the gift of sight to the blind and visually impaired.

Amal Glass’ light-weight smart specs might look like sunglasses but they can do a whole lot more.

They contain numerous sensors and a small AI-powered data processing unit complete with speakers and a microphone. The unit can be controlled by touching a keypad at the right temple.

The glasses connect to the Internet via Wi-Fi or an integrated chip and are equipped with a full HD camera and GPS to aid the wearer to navigate their surroundings and go about their daily routines with no assistance.

They can describe what they see to the wearer that cannot by identifying the things around them, such as cars, streets, furniture, and appliances through spoken descriptions.

Designed to allow the wearer to go about their business at large, the company says that the GPS system allows the user to identify the area and street they are in, eventually enabling them to easily move independently while being informed of the remaining distance to reach the destination.

The smart glasses provide 25 important services that are consistently needed by the blind and visually impaired as basic assistance in their daily and practical lives, such as obstacle warning, people recognition, notification of weather conditions and colour recognition to choose outfits.

They also include an SOS function that can share maps and photos of the location of users and can send “Help-Me” messages to allow others to identify the wearers’ location and come to their rescue.

In addition, the glasses can read. They can read product labels, barcodes, books, newspapers, menus, computer and ATM screens, among other things, in both Arabic and English with another 14 languages set to be added.

One more cool feature worth mentioning — they also include a laser “World War 3” game which works in a 3-D acoustic environment, allowing the visually impaired to enjoy advanced gaming. 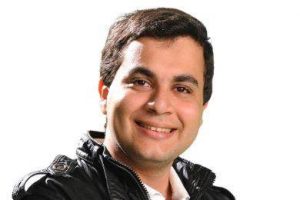 Amal Glass was founded by AI Developer and Robot Engineer Mohammed Islam who launched the game-changing glasses this year following eight years of research and development.

Cofounder.ae reports that In 2010, Mohammed developed an AI algorithm that enabled a Humanoid robot to detect obstacles and recognise its surroundings while on the move. “Later, I realized humans are in need of tech more than robots,” he said.

The founder has managed to build a strong team of like-minded experts to aid him in his quest to deliver a better quality of life for those that can’t see.

“It’s the social responsibility that encouraged my team of researchers and developers to join me and leave their current/on-going jobs (some of them were working at space agencies and multinational companies) because they believed in the product and its future.”

In 2017, Engineer Bandar Saad Al Bidnah joined the Amal Glass team as Marketing Manager, which Mohammed says brought a major shift in the growth of the company and accelerated the development process aggressively.

“While I am more focused on technology, Saad takes care of the business side of things,” he said.

In the same year, Amal Glass launched their first demo launched at the AccessAbilities Expo 2017 in Dubai where the glasses “attracted massive response and widespread appeal.”

Mohammed stated that the most challenging part of developing the glasses was creating a user interface specified for blind people. “A UI with no graphical interface, and only voice and sound interface!…

It was challenging to come up with new ways, ideas that would enable the blind to switch easily between services and applications.”

The Amal team designed the glasses so that new applications can be easily downloaded as they become available.

An online store enables users to freely download apps without the need to refer to the company and also allows for the downloading of applications from other companies and developers specialised in the advancement of visual impairment and short-sightedness software.

The company says that this is the first of a kind specialised application store dedicated to the visually impaired around the world.

Reviews from those who have tried Amal Glass have been positive. “When blind or visually impaired people put on the glasses, their first impression is ‘wow,'” Amal Glass CEO Adel Boseli told the World Economic Forum.

Looking to the future, Mohammed told Cofounder that Amal Glass aims to target 5% the 75 million people who are totally blind. “This puts our sales value to an exceeding 5.5 billion USD in the next 10 years.”

How One Blind Man’s Persistence Made Lego Accessible