Topher White is Tackling Illegal Logging with His Microphone Network

The word “deforestation” has lost much of its power in recent years. It sounds increasingly small in scale, small in impact.

This couldn’t be farther from the truth. Tropical deforestation is occurring at a blinding rate (we lost an area the size of South Africa between 1990 and 2016) and is releasing more CO2 than the entire European Union combined. The vast majority is illegal, destroying habitats, animals and ways of life.

National Geographic Emerging Explorer Topher White saw this for himself after visiting a rainforest preserve in Borneo. He was particularly taken aback by someone sawing down a tree just a few hundred metres from a ranger station intended to defend the area. He discovered the sounds of the forest—the squawks and shrills of various animals—had covered up the sounds of logging.

On his return to the US, he decided to do something to plug this gap. He set up Rainforest Connection, a nonprofit tech startup that has received funding from the Rolex Awards for Enterprise.

“The underlying thesis of this is that there are people on the ground who would stop illegal logging if they had the support to do it, if they knew where it was, and if they could do it in a safer way,” he told Fast Company. 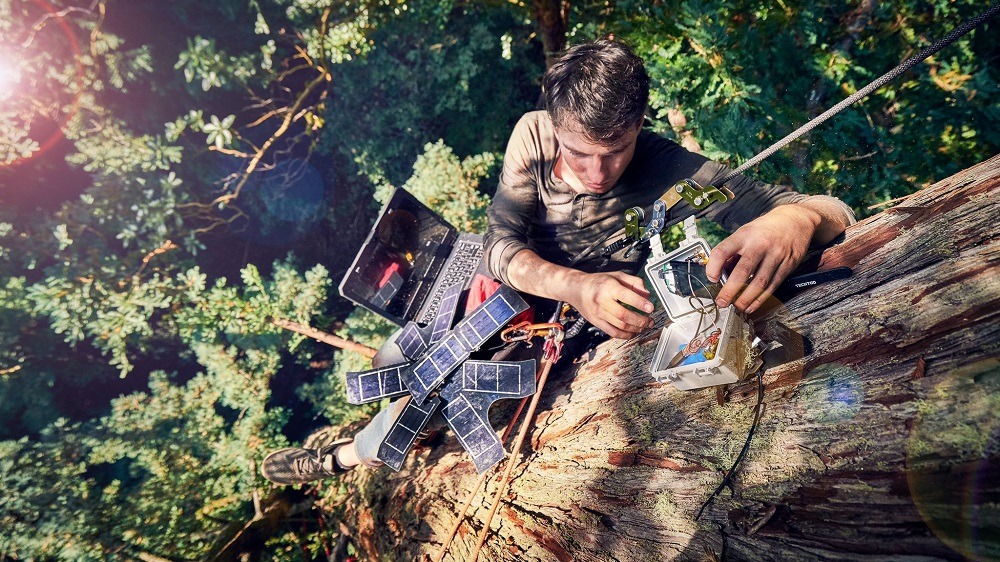 Topher White in a tree. Photo on Compelo

His solution includes old mobile phones and solar panels. Basically, what he does is fire a rope into a tree then climb up into the canopy. Once there, he installs a small box (powered by the renewable energy) that uses the phone’s microphone to listen to the forest.

This system then relays audio from the forest to the cloud, alerting rangers, indigenous people or other local actors engaged in protecting the forest if it picks up the sounds of forest destruction.

It can detect the sound of a chainsaw from up to a mile away.

“Over the past few years, we started implementing artificial intelligence, which is kind of the status quo in trying to pick out audio data, and not only detecting chainsaws, but trucks, gunshots, different types of vehicles, boats, things like that, that indicate explicit human activity,” White added to Fast Company.

The project has expanded across countries in South America: White estimates it’s now installed on 150 trees across 10 countries. The engineer says installation means working with partners on the ground to find the best place to put the tech, then following up with in-depth training for local actors.

White adds to National Geographic that helping indigenous people in particular to do forest conservation jobs—something they’re normally very active in doing—could be the “cheapest, fastest way to stop [deforestation].”

Tribes in the Amazon are Teaming Up to Save the Rainforest