The GuppyFriend bag was designed to protect clothes in the washing machine by catching microfibres as they’re released -- showing us just how easily our fabrics pollute the oceans.

A study by the UK’s National Oceanography Centre recently found that there are up to 21 million tonnes of microplastics floating in the Atlantic Ocean.

These plastics, less than 5mm in length, absorb oily and toxic chemicals and find their way into fish, birds and humans. Academics are now working on new studies to determine the contamination levels in human organs.

One of the principal causes—leading to a reported 35 percent of microplastics in the ocean—is from clothing. Specifically, from clothes washed in washing machines.

“With each wash, countless plastic fibres from synthetic textiles are making their way from washing machines into rivers and oceans,” explains GuppyFriend, a company that has developed a startlingly simple solution—a new washing machine bag.

Each Guppyfriend bag has 50 x 74 cm of space (users can put two bags in at the same time, if desired), and people simply put their clothes in the bag before throwing them in the washing machine.

The bags, tested for three years by the German Textile Research Institute, DTNW, the Fraunhofer Institut UMSICHT, and the University of California in Santa Barbara, have two key strengths: preventing the breaking of fibres for partly and mostly synthetic clothes, with an over 86 percent success rate; and retaining microfibres with an above 90 percent success rate.

Clothes inside the bag are washed as normal and are simply removed from the bag to be put to dry.

Guppyfriend says that as the bag protects against the breakdown of fibres, there may not be microplastics visible to the naked eye, even after several uses. “Don’t expect to find a lot,” Guppyfriend advises. “It’s the few tiny microfibres that make their way from each washing machine into rivers and oceans that—taken together—cause harm to oceans and sea life.”

A video explainer adds that the existence of GuppyFriend is a “daily reminder to wash and buy better.”

Explaining in further depth, the creators note that it is “fundamental” to raise awareness about microplastic pollution, but that pragmatic solutions are needed at the same time.

This is reflected in the company’s ethos. Profits from the sale of the Guppyfriend bag go to STOP! Micro Waste, an initiative to explore and initiate ideas on avoiding, replacing and re-using plastics, set up by LANGBRETT.

They also donate to the STOP! Plastic Academy, which raises awareness about plastic pollution and aims to educate students, adults and industry partners. The organisation also uses its knowledge on microfibre shredding to accelerate the re-engineering of textiles.

The bag itself can be recycled locally if the cover with the zip is separated from the fabric.

On its website, Guppyfriend stresses that microfibres are so small and tricky that current technology cannot be used to simply put filters on washing machines. They say that whilst they do have a prototype filter, and others are working on it too, it will be a while before the filters work effectively and are widely available.

The company also muses on why it’s so difficult for waste water treatment plants—ostensibly the last line of defence before water is released into the ocean—to stop microplastic fibres spread themselves. This is because of the difficulty of filtering the microfibres, and because there are microfibres contained in sewage sludge, which are then used in agriculture and run-off into rivers and oceans. 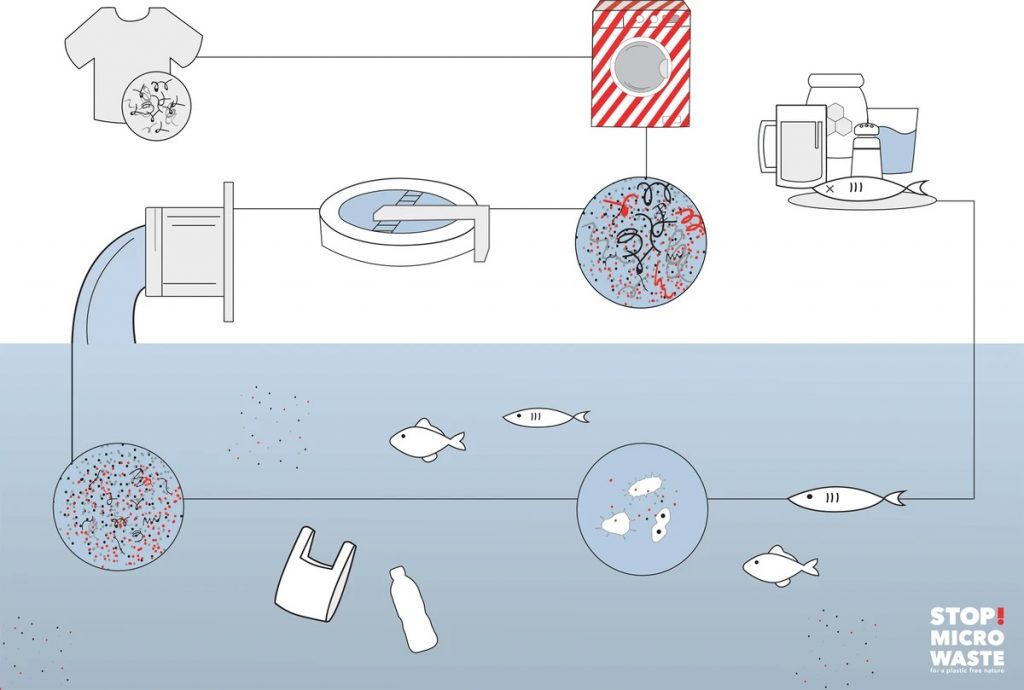 Infographic showing how microplastics make it into the ocean. Image on Guppyfriend

This comes as others continue to innovate in the microplastic space. Tyre Collective, a group of master’s students from Imperial College London and the Royal College of Art, have just won the Dyson award for their tyre attachment that captures microplastic particles from tyres as they are emitted. The Guardian notes that every time a vehicle brakes, accelerates or turns a corner, the tyres wear down through friction, and tiny particles are thrown into the air. It adds that this produces 500,000 tonnes of tyre particules annually in Europe.

In addition, Spanish designers have developed an ocean buoy to capture microplastics; and scientists at CLEAR have created BabyLegs, a DIY approach to measure the levels of microplastics in local areas, using inexpensive, easy-to-find items. Others have also emerged: Sylvie Verinder is director of both Nurdle and Filosophy Solutions, which aim to tackle microplastics and rewrite a sustainable future with plastics, respectively.