Kim Kyeong Yeon's Clear Win uses UV-C light to kill bacteria and viruses on escalator handrails and has been sold to countries all over the world.

Back in 2014, when South Korean interior designer Kim Kyeong Yeon’s 13-year-old daughter fell and hurt herself on an escalator, an idea sparked in his mind.

The incident had occurred because the teenager was worried about holding the handrail due to hygiene concerns.

Realising that many others were going hands-free on escalators for the same reason, he decided to invent a sterilisation system.

A year later he had his product—Clear Win. It is a small device that is attached to both sides of an escalator, so that the handrails pass through it.

The device is powered by a dynamo, which generates electricity from the constant movement of the escalator.

To destroy viruses and bacteria Clear Win shines sterilising ultraviolet light (specifically the UV-C wavelengths) on to the handrail as it moves through it.

UV-C light is a form of electromagnetic radiation that kills viruses and bacteria by damaging their DNA, so that they cannot multiply. 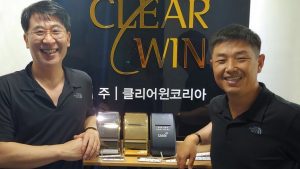 A long road to success

Not being a businessman himself, Kyeong Yeon bought his cousin Kim Yoo Cheol aboard. The duo was sure that the product would be a worldwide success.

“We were 100% convinced that it was going to be very successful, because when it was released in July 2015, South Korea had just come out of the Mers (Middle East Respiratory Syndrome) outbreak,” Kyeong Yeon told The BBC.

Mers is a coronavirus similar to Covid-19 that saw South Koreans being required to wear face masks similar to the current pandemic. However, the outbreak was much smaller than today’s and passed more quickly.

“No one was interested in our product [at the time],” says Kyeong Yeon and for the next four years, Clear Win continued to be scoffed at.

“We wanted to demonstrate their usage [to potential customers], but we were met with cold rejections. People thought they were unnecessary and pointless.”

Time and money was running out for Kyeong Yeon’s invention to take off. However, every year, Yoo Cheol, who was overseeing the finances, would say, “Let’s try for one more year.”

Do you often go to the #bookstore? One of the main bookstores in Korea is Youngpoong which adapted the customer satisfaction policy. New trend is spreading out for the escalator sterilization. # handrailsterilizer #escalatorclean #cleaning

With the hit of Covid-19, everything changed, and the two cousins have been overwhelmed with orders for Clear Win ever since.

They have now sold 43,000 units across 51 countries, including the UK, US, China, Japan and Saudi Arabia, with revenues this year of more than $14 millon (£11 millon).

Their sterilisers have been installed at airports, including London’s Heathrow and Stansted; shopping malls; hospitals; cinemas; football grounds, including Arsenal’s Emirates Stadium; and even at Masjid al-Haram, the Great Mosque of Mecca.

In October 2020, Transport for London announced that it would be installing sanitising devices on 110 escalators in its underground stations, following a six-week trial using Clear Win devices at the Heathrow T123 Tube station.

Kyeong Yeon and Yoo Cheol are now looking to take on more staff to keep up with demand at their factory 20 km south of Seoul.

“When things were especially difficult, we would drink beer by the Han River in Seoul to console each other. We still do that nowadays but instead to celebrate,” says Kyeong Yeon.

“Even after the coronavirus pandemic has ended and our normal lives are resumed, I think many people around the world have been traumatised by this experience and might have fears for future viruses.

“So we think there will be a sustained interest in public health conditions and hygiene, giving our products further room to grow. We will continue to cater to people’s demands for a safer world.”