This Device for Opioid Overdose Automatically Administers the Antidote

Developed by researchers at Purdue University, the device could be a game-changer for reducing the number of overdoses caused by the US-Canada Opioid Epidemic

The US-Canada opioid crisis is one that claims thousands of lives every year. More Canadians are dying than at the height of the 90s HIV epidemic, and every day more than 130 people in the United States die from an opioid overdose.

With approximately 48,000 attributed deaths in 2017, opioid overdose is now the leading cause of death amongst Americans under the age of 50.

Opioids can bind to brain receptors that are responsible for breathing, causing hypoventilation, which all too often leads to death in those that overdose.

This is despite there being a readily available antidote to opioid overdose.

Naloxone (sold under the brand name Narcan) is an opioid antagonist that prevents opioids from binding to brain receptors and reverses the effects of an overdose.

The problem is when a person does overdose, it’s often too late for them to administer the life-saving drug themselves, as they are likely to be unconscious and incapacitated.

New hope comes in the form of a smart system developed by researchers at Purdue University, which includes an implantable naloxone-releasing device that can automatically halt an overdose without anyone’s intervention.

“We propose a simple, low-cost, minimally-invasive automatic antidote delivery device (A2D2) that can administer a large dose of naloxone upon detection of overdose-induced respiratory failure,” stated the researchers in the Journal of Controlled Release.

“The antidote is always going to be with you,” said Hyowon “Hugh” Lee, an assistant professor of biomedical engineering at Purdue.

“The device wouldn’t require you to recognise that you’re having an overdose or to inject yourself with naloxone, keeping you stable long enough for emergency services to arrive.” 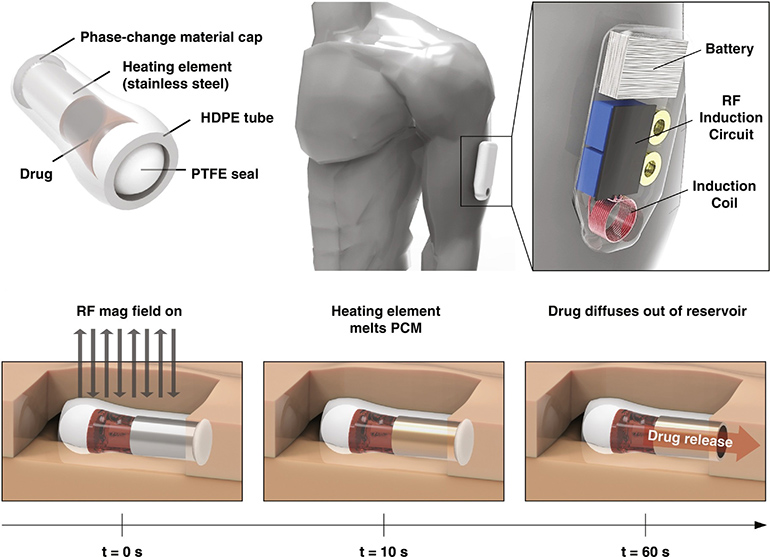 The system includes a wearable device that detects the wearer’s breathing, via electrocardiography, and calculates the person’s respiration rate. An implantable drug-releasing cartridge, placed under the skin and below the wearable, is triggered by the external device using an electromagnet. The magnetic field is made to fluctuate, heating up the implant and breaking it apart, releasing the naloxone in the process.

The system is not quite complete, as the researchers must still prove that the automatic part of the device works in in vivo studies, but it has been proven that it does detect the respiration rate and release the drug from its capsule.

An automatic release device such as this could also prove life-saving for those suffering from allergies that can cause them to go into anaphylactic shock.