This Boss Was Once Homeless. Now He Runs a Pizza Empire in NYC

The USA may be the biggest economy in the world, but even in New York — a city that sums up the American dream — almost 1 in 120 people are homeless.

This is something 39-year-old Hakki Akdeniz knows all too well. As a young 20-something in New York City (NYC), arriving with nothing but a dream and $240, he was forced onto the streets. He’s lived through intense hardship—sleeping on park benches, the subway, a homeless shelter, a boiler room.

But, he’s now a local celebrity, with seven pizza shops, a raft of celebrity clientele, and 3.5 million Instagram followers to his name. The head of Champion Pizza has earned headlines with his enormous pizzas and spun flaming pizzas on national TV and international pizza competitions.

And through it all, Akdeniz has been a constant and unwavering champion for the homeless community—providing people with free food, clothing, haircuts and showers every week.

Tag your favourite TV show which TV show should we be in next? 100 x 60 inches pizza was made! The BIGGEST delivery Pie ?By the Way we make this special pie every Wednesday for the homeless shelter

The New York Times (NYT) reveals how Hakki Akdeniz grew up making Turkish Pizza in Turkey before relocating to New York in 2001 with a couple of hundred dollars in his pocket.

He was supposed to stay with a friend, but he disappeared at the last minute and left Akdeniz with nowhere to stay. He ended up in Grand Central Terminal. Eventually, after nights riding the subway, someone told him about Bowery Mission, a well-known homeless shelter in the heart of Skid Row.

He stayed there for 96 nights, eventually finding an interview for a pizza shop in New Jersey. His interview went poorly—he was “shaking, so nervous” and hired not to make pizza, but to wash dishes. A cook gave him got a tip about a building in Queens where he could do odd jobs and live rent-free in the basement. He ended up sleeping in the corner of the boiler room and working in the pizza shop for a year.

From here, Akideniz’s life starting its slow ascent towards his current success. He saved enough to move into a shared apartment. He got a new job washing dishes at a restaurant in Hell’s Kitchen, where he later was promoted and spent five years as a pizza maker.

In 2009, with $40,000 of savings, he bought his first pizza shop in the Lower East Side. The shop was twice the price, and he agreed to a steep payment plan with the owner. Even by cutting all costs— sleeping under the pizza oven in the shop—he quickly fell behind and was threatened with “being put in the oven.”

Things took a turn for the positive when he won first place at a pizza-making contest in 2010, launching his trademark move: spinning pizza dough in the air after setting it on fire. This led to a cover story in PMQ Pizza magazine, which he handed out to schools in the neighbourhood, and a rush of people visiting the shop. It became so busy that he was able to save up for another pizza place, which he called ‘Champion Pizza’ after the nickname local teenagers had given him.

The rest is history. He ended up buying a third and fourth place, improving his ingredients—organic sauce from Naples, extra light pizza dough—and kept climbing. He’s just opened his seventh place, around the corner from the building in which he spent one year sleeping in the basement. 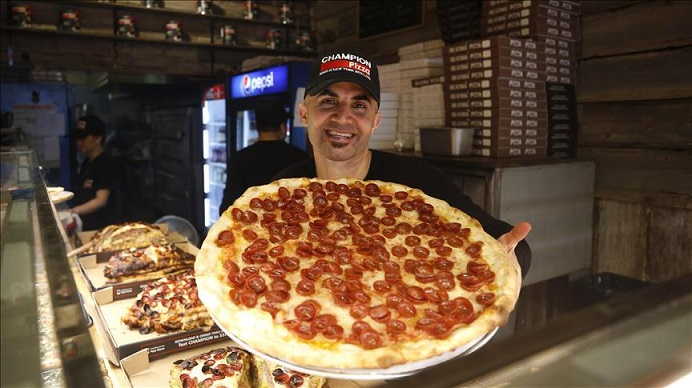 Every Monday and Wednesday, a line of people in NYC gather, carrying everything they own, to receive warm food and hot pizza from Hakki Akdeniz himself.

He’d started out by passing out free slices to people on the street who came and asked for food, then made everything a bit more formal, handing out food and clothing on West 34th Street.

NYT adds that he even found a nearby barbershop that agreed to cut homeless men’s hair, as well as a gym that would let people use its showers. He paid for both services. Akendiz then became known as ‘The Pizza Guy’ for distributing pizzas in the Lower East Side.

All of this—and the fact that it’s him, not his employees, on the front line—has earned him huge amounts of respect from people of all shapes and sizes. Actor Liev Schreiber and rapper Tyler the Creator are just two of the celebrities to have turned up recently at his pizza shops.

Akendiz went viral after clips of him appeared in which he was breakdancing while spinning pizza dough on the breakfast show ‘Good Morning America.’ He also made a huge heart-shaped pizza on Valentine’s Day for homeless people in the community.

Speaking about his time in Bowery Mission for a Turkish news report, he said: “I stayed there for 96 days. I am glad I did. They say there’s a reason for everything. I am glad I stayed in the shelter. I am glad I was desperate. I am glad I went to Canada.

“If none of this happened, I wouldn’t be here on Monday and Wednesday to help these people in need.”