Developed by Shanghai's Fudan University and the Changchun Chinese Academy of Sciences, the camera can also take photographs and record video in the same ultra-high resolution

The camera system is capable of not only capturing a single face out of a stadium full of people, but also using artificial intelligence and cloud computing to locate and identify that person in real time.

Most consumer cameras don’t go beyond 50 megapixels, and one of the most advanced cameras on the market tops out at 400 megapixels.

The camera system has five times the 120-million pixel resolution of the human eye.

“It’s a contradiction for traditional cameras to see clearly and widely,” said Zeng Xiaoyang, head of the camera system’s research team and professor at Fudan University. “When 20 million pixels are allocated to 10,000 people, each person has only 20 pixels, so it is impossible to see the human body clearly.” 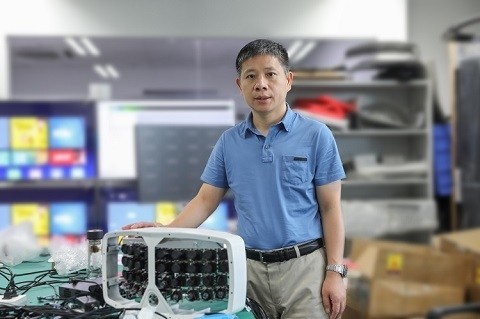 The system can also record videos with the same ultra-HD precision as its photos. Through their innovative “billion-level pixel imaging technology,” the researchers developed a concentric composite-scale optical imaging scheme that can create ultra-resolution videos without needing a bigger camera and lens.

“When pixels reach the level of 500 million, especially when video images are needed, the camera system will become very large and a real-time video mosaic is basically impossible to achieve,” Zeng said.

In a press release, Zeng explained that mobile video resolution is generally 1080p, up to 4K HD, after which network bandwidth cannot keep up. “Our cloud camera has a resolution of 500 million pixels, a hundred times that of 4K,” he said.

However, shooting ultra-HD videos requires large data transfers, which can create a wireless transmission bottleneck. To overcome this, Zeng explained that, in time, the primary interest of the ultra-high-definition image needs to be better targeted. The researcher also believes that the camera’s facial recognition technology needs to be improved to increase its efficiency and lessen the amount of data that needs to be transmitted.

According to the Global Times, while many experts throughout the country applaud the ways the camera can be used in the military, national defense and public security, some expressed concerns about possible data safety and privacy problems.

“The acquisition of massive video image data must be supervised,” Zeng said. “After all, there is a balance between strong security and personal privacy protection.”