These Women in Scotland are Tackling Single-Use Period Products

#TrialPeriod is a female-led campaign set up by the Scottish Government, Zero Waste Scotland and social enterprise Hey Girls to stem the flow of single-use period products in the country.

The British Seaside… Sand, stones, sun (sometimes) and a rainbow of tampon applicators. Unfortunately, the last one has become a regular sighting on UK beaches.

In a bid to stem the flow of single-use period waste in Scotland, the Scottish Government, Zero Waste Scotland and social enterprise Hey Girls have teamed up, launching the campaign #TrialPeriod earlier this month.

To boost the use of reusable pads, pants and cups across Scotland the campaign has been giving them out for free.

The BBC reports that it was so successful that the website crashed when it went live due to the huge demand.

Hundreds signed up to the £300,000 campaign and more than 2,000 products are being given away to those who applied.

According to Zero Waste Scotland, 427m single-use products such as tampons and pads end up in landfill or contribute to marine litter in Scotland every year.

To make matters worse, one pad can take as long as 500 years to fully break down. On average, it’s estimated that one woman will dispose of 11,000 period products in her lifetime

The organisation also says that a woman will spend, on average, around £440 on single-use period products over a period (no pun intended) of 10 years.

In contrast, menstrual cups cost as little as £10 and can last up to 10 years.

Helping others make the switch

Catherine Bozec, who is leading the #TrialPeriod campaign, made the switch from disposable pads to reusable cloth pads after learning about the environmental impact of single-use period products at work:

“I have worked for Zero Waste Scotland for five years and even working in this environmental field, I hadn’t really given reusable period products a second thought until this campaign landed on my desk,” she admitted to the BBC.

“So about six or seven months ago I made the switch to cloth pads because I was a disposable pad user and I’ve not looked back since. I love them.

“They’re really comfortable, they’re easy to maintain and it’s great at the end of my cycle to see I have not put anything in the bin.”

As part of the #TrialPeriod campaign and in her personal efforts to raise awareness around sustainability, Bozec candidly talks about her experience switching to cloth pads in videos on social media, opening up refreshing and educating conversations about menstruation — a topic that for so long has been shrouded in shame.

It might be the end of #EWOA2019 but I’m so looking forward to the start of #TrialPeriod next month – here’s my take on #PlasticFreePeriods pic.twitter.com/GAgIKLhHT8

A recent poll found that in the UK, more than a quarter of women have been forced to miss work or school because they cannot afford period products.

Buy-one-give-one social enterprise Hey Girls was founded by Edinburgh-based Celia Hodson and her daughters to tackle this problem that we call period poverty.

The firm makes eco-friendly period products including cups and cloth pads which they provided for the #TrialPeriod Campaign.

Hodson set up Hey Girls after experiencing the financial burden of menstruation as a single mum with two girls:

“Having been a single parent I understand firsthand the financial strain of buying period protection when struggling to survive on benefits. The situation for women just like me hasn’t changed in twenty years, which is why we set-up Hey Girls,” she says on their website.

For every pack of product bought from Hey Girls, they give a pack to girls or women who cannot afford to buy their own.

They have donated almost 6.2m products since setting up in January 2018.

On November 22nd, Hodson was named Great British Entrepreneur of the Year 2019. 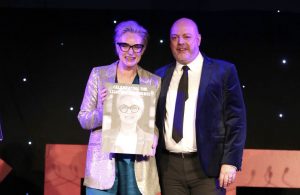 Sophie is one of the pupils on the “Menstruation Association” at Broughton High School in Edinborough.

They make sure that all of the school bathrooms are fully stocked with free period products and also provide advice on switching to eco-friendly options.

The school received an allowance from the Scottish government to spend on period products, some of which went on reusables.

Sophie told the BBC that she was previously reluctant to try reusables but now uses the menstrual cup after receiving one free from school.

“When you get it for free, you think you may as well try it,” she said. “I think it’s something that makes it easier to make the change.”

The pupils reported that the campaign had gone down well at the school with students keen to do their bit for the environment — especially after this year’s climate strikes.

The #TrialPeriod campaign is further advancing an agenda that Scottish women are proving to be dedicated to.

Despite the alarming facts around period pollution, the campaign reports that 1 in 10 scots are using reusable menstrual products for more, cost-effective, convenient and sustainable periods and a survey found that 76% of people said they’d consider trying a reusable period product.