Before you even put them on, the Jefferson Bloom shoe from Native Shoes cleans 80L of water and keeps 15 balloons of CO2 from entering the atmosphere.

Algae is proving to be a super-material and reliable ally in our fight to reverse the damage we have done to the environment from our years of favouring a linear economy model.

The green slimy stuff is being used to make superfoods, reduce the amount of methane released in the atmosphere from cows and to clean natural water sources.

It is also demonstrating that it is can be used to clean up the footwear industry.

Canadian brand Native Shoes has developed a sneaker that is entirely made from one continuous piece of algae-enriched EVA.

EVA or ethylene-vinyl acetate is a rubber-like flexible plastic often used to form the cushioning midsole of trainers or the whole shoe in the case of Crocs.

Native Shoes’ Croc-reminiscent sneakers — the Jefferson Bloom — have replaced 10 percent of the EVA with BLOOM™ foam, a material made with algae biomass harvested from freshwater sources. BLOOM foam is created by Algix, a company pioneering eco-uses for algae.

Although only a small percentage of the shoes incorporate BLOOM foam and the rest is made from plastic, the numbers are still impressive.

An algae harvest for one pair of Bloom shoes restores 80 litres of filtered water right back into the environment — that is equivalent to 3 months of water consumption for one person.

The same manufacturing process also prevents 15 balloons worth of CO2 from entering the atmosphere.

How does it work?

To create the material, Algix removes algae from fresh waterways where it exists at epidemic levels.

BLOOM Foam’s tagline is “turning green water into clean water,” because algae’s uncontrollable rise in growth is harming plant, animal, and human life and greatly impacting aquaculture industries — so by removing it and harnessing its power, Bloom is “turning a negative into a positive,” says Mike Van Drunen, the company’s co-founder and CEO.

“Algal blooms have become prevalent worldwide due to a rise in global temperatures and a subsequent increase in water temperatures. They’ve also been impacted by increased human population growth and from activities like overfishing, which have increased nutrient loading in waterways. As a feedstock, algae biomass is a non-food resource, requiring no pesticides to grow and is found in abundance globally. This ensures a consistent and stable raw material supply for years to come,” says Bloom.

The foam is produced in a patented process that utilizes Algix’s dried algae biomass (GMO-free) which is solely collected from waste streams across the US and Asia.

Specially engineered water tanks filter up to 175 gallons of algae-polluted water per minute through its mechanism; while also netting 300 lbs of algae in a single day.

The clean, filtered water is released back into the environment, while the algae is dried into a biomass and formed into palettes which are then expanded into a foam and passed on to brands such as Native Shoes to turn into footwear.

BLOOM Foam has also been used to make yoga mats, surfboards and other sports equipment but the company is specifically targeting the fashion industry.

The foam has previously been used by fashion brands Ecoalf and H&M and turned into all manner of footwear. But, Native Shoes say that they believe that they are the first brand to incorporate this material throughout the entire construction of a product. 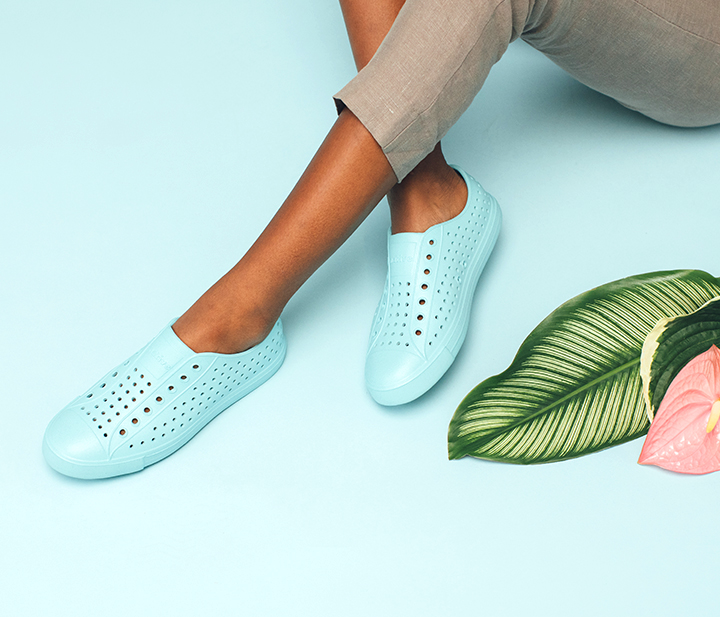 “For Jefferson Bloom, we use a one-piece injection mould, which allows us to create the entire shoe, including upper, midsole and outsole from a single compound which is a combination of Bloom and EVA,” Gabe Lam, Native Shoes’ design and development manager told Dezeen.

The shoes (which were designed to be durable and longlasting) can also be recycled when they reach their end of life through the Native Shoes’ Remix Project.

“Using a regrind process, we are able to break down the materials found in every style of our shoes including sandals, slip-ons, knit sneakers and boots,” said Lam.

“They can be reground into a versatile material that is useful for example in the creation of seating, playground flooring and insulation. ”

The first playground with flooring created through the Remix Project is scheduled to open this year.

The company is aiming to recycle 30,000 pairs of shoes by the end of 2019 and have already achieved 97 percent of that goal.