The Netherlands is Testing a Bike Path Made of Recycled Plastic

The technique could soon be used to build entire roads

The Netherlands PlasticRoad project launched last year uniting a trio of European companies to test a bike path made from recycled plastic.

The concept of a circular economy is becoming increasingly prevalent as companies and individuals rush to meet the standards that will ensure the future of the planet by generating less waste and finding inventive ways to reuse what has already been created.

Plastic is one of the biggest polluters on the planet. Every year, about 8 million tons of plastic waste escapes into the oceans from coastal nations —  equivalent to placing five garbage bags of trash on every foot of coastline around the world.

We became addicted to plastic for its convenience and durability, but many single-use plastics take hundreds of years to break down.

The Netherlands PlasticRoad pilot project is harnessing the power of plastic to create longstanding roads from a circular economy standpoint.

The road contains sensors that measure the path’s durability, the number of cyclists biking on it, and the temperature. It also has a hollow space that can store pipes, cables, and rainwater to prevent flooding.

PlasticRoad’s design includes prefabricated, modular sections, which are light and can be built in a matter of days, while traditional concrete or asphalt roads take months to construct. 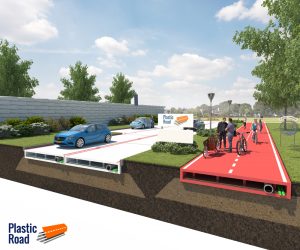 PlasticRoad say that in the future, they want their roads to be made of 100 percent recycled plastic.

The programme is a clever way to make use of single-use plastic that has little value, like old plastic bottles, beer cups from festivals, cosmetic packaging, and plastic furniture.

Using recycled plastic for roads has numerous benefits — not only is it weather resistant and longer-lasting than asphalt, the road’s carbon footprint is also lower than that of concrete or asphalt, PlasticRoad claims, because it does not require introducing new materials.

“We used post-consumer waste that otherwise would be dumped or incinerated,” Gert-Jan Maasdam, a director of technology at Wavin, told Fast Company.

Recycled roads have the potential to help reduce plastic waste around the world, and the PlasticRoad leaders want to create parking lots, sidewalks, and entire streets next.

“It’s hard to predict how many of the world’s roads will be built with plastic,” says Maasdam. “But the underlying economics and benefits of PlasticRoads outweigh traditional roads.”

The project’s leaders are using the pilot to address potential roadblocks around using 100 percent recycled plastics. This is because, on its own, plastic may not have enough stiffness to provide enough traction for a safe road.

The PlasticRoad leaders have said that as initial experiments show this to be the case, they may add sand or crushed stone to the road’s surface.

A month after the first bike path was built, PlasticRoad erected another in Giethoorn, a Dutch town in the province of Overijssel, in November 2018.

Both pilot projects in Zwolle and Giethoorn will be continuously monitored by the PlasticRoad partners and their customers for five years. In the meantime, the projects are regularly evaluated in order to further develop the PlasticRoad concept into a product that can be introduced to the market.

In India, the use of recycled plastic for making roads has become a commonplace practice.

France holds the title for creating the world’s first fully recycled road, although not from plastic waste, but from repurposing the material from old roads.