90-year-old Yayoi Kusama’s dot and pattern work has been exhibited to millions across the globe—a style honed through a voluntary four-decade residency in a psychiatric hospital.

You may not recognise the name Yayoi Kusama. But you may well recognise her artwork, which has had a phenomenal influence on Instagram-fuelled popular culture over the past decade.

Kusama’s Infinity Mirrored Room, a kaleidoscopic cosmos of infinite reflections and LEDs, has attracted millions of visitors the world over. The exhibit was so popular at New York’s Hirshhorn Museum that audiences—who had queued for hours for a taste of selfie stardom—were limited to a 30-second visit. A five-storey museum in Tokyo has been dedicated to her furniture, sculptures and paintings. LA’s Broad Museum pulled in $2.25 million in ticket sales for its Kasama exhibition.

Her signature dots and patterns have influenced some of the world’s most revered artists, among them Andy Warhol and Joseph Cornell. Now 90 years old, the “Polka Dot Princess” remains instantly recognisable in her shock red wig and polka dot clothes—and has retained her crown as the biggest-selling female artist in the world.

A childhood among the flowers

Kusama was born to wealthy parents in rural Japan in 1929. It wasn’t a particularly happy marriage, and young Yayoi spent much of her time surrounded by nature and sketching in her family’s plant nurseries.

On one of those days, sat in a field of flowers, the artist had a hallucination that affected her greatly: The plants started talking to her. As explained in a biography on Tate’s website, “The heads of flowers were like dots that went on as far as she could see, and she felt as if she was disappearing or as she calls it ‘self-obliterating’ – into this field of endless dots.

“This weird experience influenced most of her later work.”

Another time, aged 11, she imagined a pumpkin talking to her. As reported in The Guardian, she painted a picture of the vegetable and won an art prize. Her pumpkin sculptures now sell for hundreds of thousands of dollars. 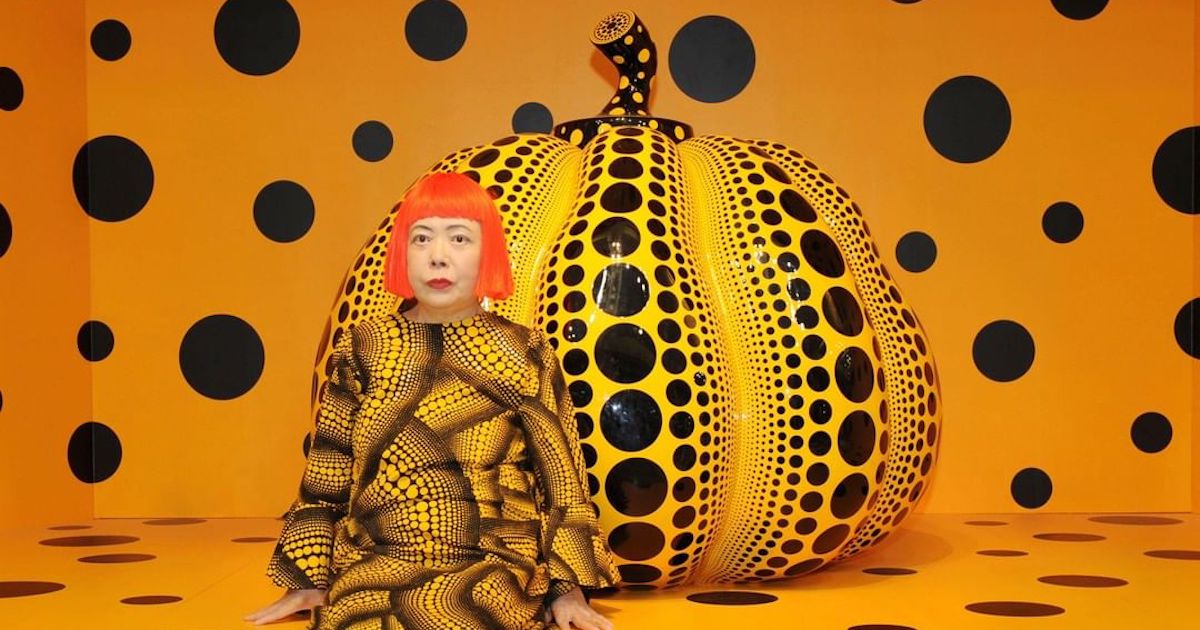 Yayoi Kusama and one of her pumpkin sculptures. Image on My Modern Met

After starting her career with solo shows in Japan in the ‘50s, Kusama moved to New York. Here, she became a key figure in the hippy counterculture movement of the late 1960s. She hosted a series of “happenings,” such as the Homosexual Wedding in 1968, and other events in which naked participants were painted with bright coloured polka dots. She performed alongside Fleetwood Mac.

In New York, she developed her fascination with infinity, hosting a solo show in which viewers could see themselves reflected to infinity in room full of polka dots and mirrors. Dots and the boundaries between people and the universe recurred as common themes, and many credit the artist with having a heavily underappreciated impact on the development of minimalism and pop art.

“Our earth is only one polka dot among a million stars in the cosmos,” Kusama is quoted as saying on the Tate website. “Polka dots are a way to infinity.

“When we obliterate nature and our bodies with polka dots, we become part of the unity of our environment.”

She returned to Japan in the early 1970s, where after a few unsuccessful business ventures—and a struggle with mental health—she voluntarily checked herself into the Seiwa Hospital for the Mentally Ill. She’s been there ever since, churning out fantastical scribbles in her nearby Tokyo studio from breakfast until dinner. Interviewed by The Guardian, she said that being in the hospital had “made it possible for me to continue to make art every day, and this has saved my life.”