Grigor Hovannisyan's 'Zucklight' was born from a sweet gift that Mark Zuckerberg made for his wife to get a better night sleep.

When Facebook founder and CEO, Mark Zuckerberg throws out a new business giving the green light for someone to “run with [it],” it surely can’t be long for an opportunity hungry entrepreneur to come along and do just that.

Grigor (Greg) Hovannisyan ran, and in just three weeks he had created the prototype for ‘Zucklight.’

Zuckerberg shared that he had built his wife, Priscilla Chan, a device he called a “sleep box” back in April.

It is a wooden box that sits on the bedside table and emits a soft light between 6 and 7 a.m. — when it’s time to go and get the kids up.

It was born out of that all too familiar frustration of constantly waking up to check the time on your phone when you know you must get up for something important.

“Being a mom is hard, and since we’ve had kids Priscilla has had a hard time sleeping through the night. She’ll wake up and check the time on her phone to see if the kids might wake up soon, but then knowing the time stresses her out and she can’t fall back asleep,” said Zuckerberg in a Facebook post. 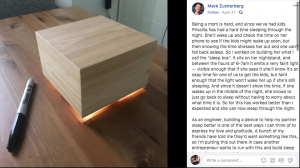 After friends expressed interest in the box and being the busy billionaire that he is, he posted his idea on facebook “in case another entrepreneur wants to run with this and build sleep boxes for more people.”

By 18th May (a mere three weeks after Zuckerberg’s facebook post), Hovannisyan had a prototype, on 13th June he launched a Kickstarter campaign and with less than a month left to go it has already raised over $108,000. This is more than 21 times its $5,000 goal which was reached in around 3 hours.

The Zucklight team have added a number of cool features to the product, including; a wireless charger that charges your phone when it’s placed on top, an intuitive app to control the colour and brightness of the light from your phone and technology that can check the air temperature, quality and humidity. All things that have been proven to affect how well you sleep.

They are mainly marketing it to tired mothers, as the product’s central feature is the light that starts glowing at a scheduled time so that when you open your eyes you know whether it’s time to get up or not — skirting the disruptive act of checking your phone.

Hovannisyan is an Armenian self-confessed serial entrepreneur. His founding team members are also Armenian, henceforth Zucklight is being developed in Armenia while the company’s headquarters will be in New Jersey.

In addition to ideating Zucklight, Hovannisyan is the founder of a security technology company called Premier Integrated Technologies and climate change thinktank, Global AM.

While the Zucklight is clearly named after Zuckerberg, he has no involvement in the product or the company. However, Hovannisyan and his team are no doubt benefitting from affiliation with the Facebook founder. If it’s good enough for Pricilla Chan…

According to Kickstarter, Zucklight will be available in November 2019.