The Amazing Life of Seretse Khama, the Man Who Transformed Botswana

The first president of post-colonial Botswana is credited with transforming the country’s fortunes without falling victim to war or corruption.

History is littered with people who, for one reason or another, never receive the recognition they deserve.

One such person is the courageous Seretse Khama—a man whose impact on the world was so revolutionary that many are saddened not to see his name mentioned more frequently alongside greats like Nelson Mandela.

Move to the UK

According to historians, Khama was known for his intelligence, integrity, and “wicked sense of humour.” He was born in 1921 in the British Protectorate of Bechuanaland, the name for colonial Botswana, which was governed from an office inside neighbouring South Africa.

Khama’s grandfather and father passed away by the time he was four, leaving the child hereditary king of one of the region’s most important tribes. Khama’s uncle acted as regent, and young Khama eventually left to study for a degree in South Africa, then a one-year law course in the UK in 1945. It was here, at a dance, that Khama met Ruth Williams—a white woman, working as a clerk at Lloyds. They fell in love and were married in 1948.

This simple union ended up drawing out the worst of colonial Britain and laying the foundations for Botswana’s independence. The story was immortalised in a 2016 feature film, starring David Oyelowo and Rosamund Pike.

In 1949, Khama travelled back to Bechuanaland to convince his people that his marriage to a white, non-royal woman would not stop him being a good ruler. After a series of meetings, attended by thousands, he was easily given the all-clear.

Problems only arose after Khama came back to the UK. Britain invoked its colonial oversight and claimed that Khama was unfit to hold his hereditary kingship. A UK parliamentary investigation was launched to back up the claims.

This was pure politics, of the racist kind: The UK wanted continued access to gold and uranium for its atomic bomb project from apartheid South Africa, which had, in 1949, just banned interracial marriage. South Africa didn’t want a Black and White couple ruling just over the border, which the UK was all too happy to enforce—even suppressing the parliamentary investigation report for 30 years, which concluded Khama was “eminently fit to rule.”

In 1951, the UK followed this up by banishing Khama and Williams from Bechuanaland for life.

The marriage became a global affair. Intense pressure piled onto Britain from all over the world to reverse the decision. Finally, in 1956, Britain allowed Khama to go back on the condition that he renounce his right to take up the chieftainship. Khama agreed, and in the late 1950s moved back to Bechuanaland with his wife and young children. 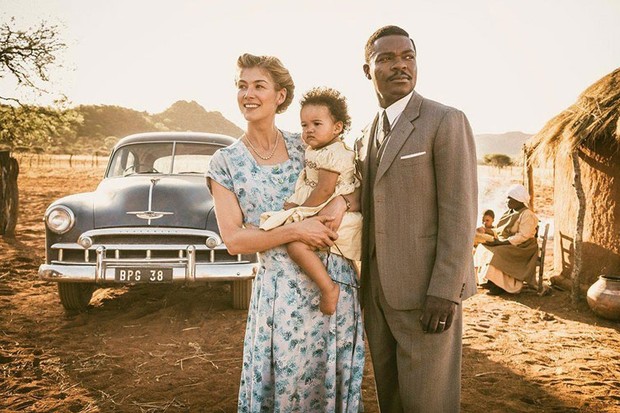 David Oyelowo and Rosamund Pike as Khama and Williams in the 2016 feature film “A United Kingdom.” Photo on Radio Times

Khama’s time away had turned him into a national hero—a victor against the colonisers. He capitalised on this fame with involvement in domestic politics and, in 1961, founded the Bechuanaland Democratic Party. He became the go-to voice for the independence movement in the country and, in 1965, swept to electoral victory as Bechuanaland’s Prime Minister.

With this position, he managed to convince the British to move the capital of Bechauanaland out of South Africa—and, in 1966, to secure independence for the country as its first President.

His tenure had enormous ramifications for the country. In the 1960s, Botswana was the third-poorest country in the world, with only 100 secondary school graduates.

Yet Khama’s assured leadership steered the country through phenomenal growth—it had the fastest growing economy in the world from 1960 to 1980—without falling victim to the corruption and conflicts engulfing larger, neighbouring countries. Khama’s economic policies were market friendly, based on the rule of law, and later supported by vast diamond deposits.

His government invested heavily in infrastructure, subsidising everything from veterinary services to healthcare and education. Botswana also nationalised beef exports, another key source of income. By the mid 1970s, the country had a budget surplus, and Khama had emerged as a leading light in Zimbabwe’s tradition to independence. 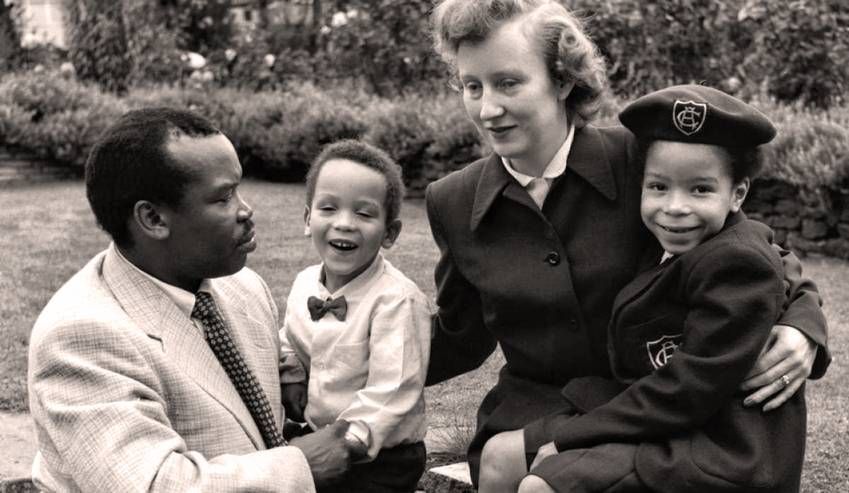 Khama and two of his children. The child on the left, Ian Khama, ruled Botswana from 2008 – 2018. Photo on DailyMaverick

It’s impossible to overstate how groundbreaking these developments were. Every single one of Botswana’s neighbouring countries—Angola, Namibia, Zimbabwe, Zambia and South Africa—struggled with at least 15 years of conflict throughout the second half of the 20th century. Khama and Botswana remained out of these, despite the need to ensure trading relations.

The story on corruption is similar. Angola has grappled with “pervasive corruption.” Zimbabwe’s corruption has been described as “dazzling.” Zambia has had its own problems. In office, Khama resisted calls to drastically overhaul the country’s bureaucratic apparatus and instead to appoint based on merit.

Khama died in 1980 of cancer. But even to this day, as some problems begin to emerge—Khama’s son Ian, who ruled Botswana from 2008-2018, is legally challenging money laundering accusations—the country fares strongly in international corruption measures. Transparency International’s 2018 index gives Botswana a score of 61/100, ranking it 34th among 180 assessed countries. That puts it far ahead of the global average score of 43, and not that far behind even the USA, ranked 22nd with a score of 71/100.