Global Shakers spends an evening at Refusion Delivery, where chefs from Syria, Sudan and Venezuela serve up a storm of delightful cuisine from their home countries.

First came the hummus. Perfectly creamy with just the right kick of garlic.

Then the larger dishes. Crispy falafel, served with an attractive dusting of purple sumac—a Sudanese blend of pomegranate and spices. The softest, most deliciously textured tequeños, a hand-rolled cheese finger filled with a guava-based quince. And seemingly as a test of character, two sauces: a traditional yoghurt and garlic blend from Venezuela and a peanut-based blast of spice that Ahmed, the chef from Sudan, assured me accompanied every dish back home.

I sat at the bar in Refusion Delivery, in the Valdeacederas neighbourhood of Madrid, Spain, on a relatively quiet Wednesday evening. To my left, a crystal-clear view of the most famous financial buildings in the city. It’s obvious that the neighbourhood is on the cusp of major infrastructure change: the row of long-standing bars and laundrettes are punctuated by slightly flashy, high-end coffee outfits. 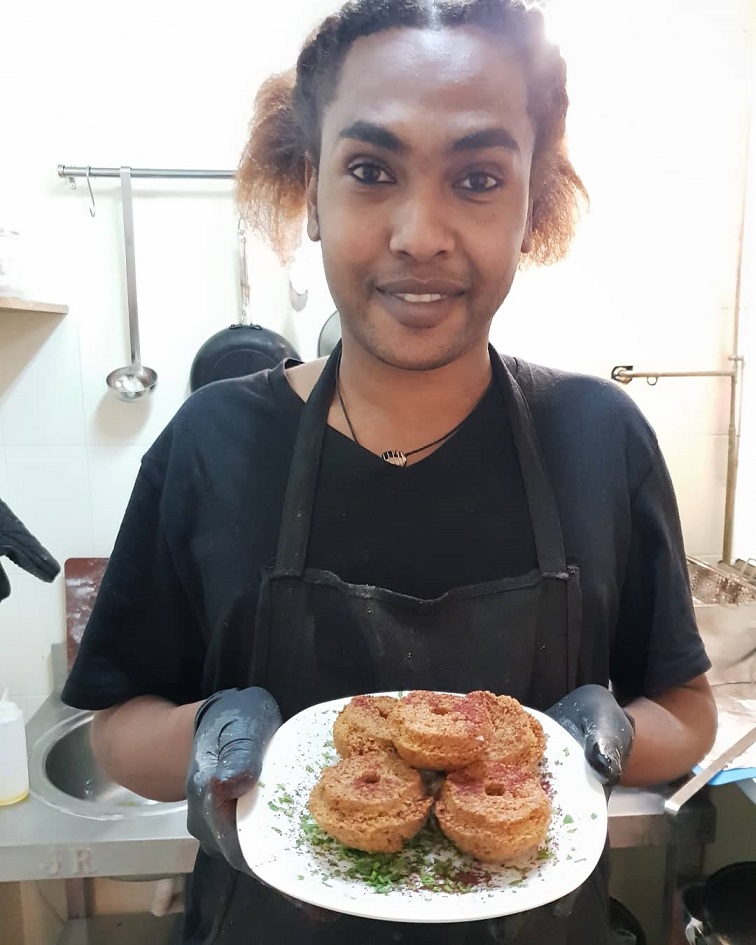 To my right, a narrow but cosy stretch towards the cooking and prep areas. As orders pinged up on a screen, Christina Samson—the volunteer front-of-house staff, restaurant part-owner, and PR coordinator—sped through to the kitchen to attach the pedido on a fridge. Yoli, the chef from Venezuela, would get to work on prepping the items, which Ahmed then would cook, fry or bake to order.

Customers can order through the website, selecting food type by country. Much like any urban takeaway service in 2020, once the orders have been cooked and packed into biodegradable tupperware, Refusion delivers the food through bicycle couriers. Even here the choices are ethical: They work closely with La Pajara, a team of ex-Deliveroo and Uber Eats couriers who banded together to ensure each rider has a monthly salary, sick pay, and paternity leave**.

While getting a batch of empanadas ready for the evening, Yoli explained her journey from engineer in Venezuela to chef at Refusion.

“I came to Spain two years ago,” Yoli told GS. “When I arrived, I made the decision to not stay at home. I wanted to go out, teach classes, do this and that.

“I’d done cooking courses in Venezuela, for fun. It hadn’t been my job, but I loved it.”

She came across a local charity called Madrid for Refugees (MFR), which runs a well-respected and wide-ranging programme of events to help asylum seekers integrate into the community. She started teaching yoga, then cooking—specialising in home-cooked, home-style food.

In late 2019, she heard that Refusion Delivery—the latest project inspired by MFR—was looking for a chef from Venezuela, as the restaurant-come-takeaway’s first Venezuelan chef had left. “I entered Refusion like…. well, in sports, you’d say like an ‘emergency substitute,’” Yoli said with a wink.

The story was similar for Ahmed. First with MFR, and then with Refusion. The charismatic jack-of-all trades—singer, dancer, masseuse— expressed a wish to “support the restaurant and search for more refugees, who can form part of the project and come here to work.” 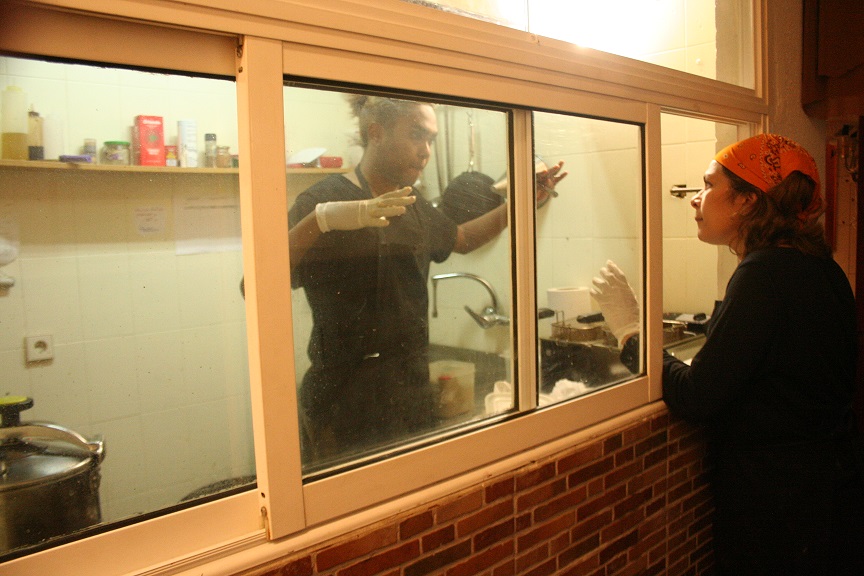 Chefs Ahmed and Yoli discuss dishes for the evening

From the ground up

Back at the bar, a warm space of panelled wood and softly reverberating music, Christina paused. As the founder of MFR and one of the keys to Refusion’s ongoing success, she set out to explain Refusion’s delightful path from idea to reality.

“We were inspired by a company called Eat Offbeat in New York,” she began. “They host events and deliveries to businesses.

“You can eat here, but we want to focus on deliveries of high-quality, international food,” she said, adding that the space has been contracted for special events, during which there have been around 25 people in the restaurant. 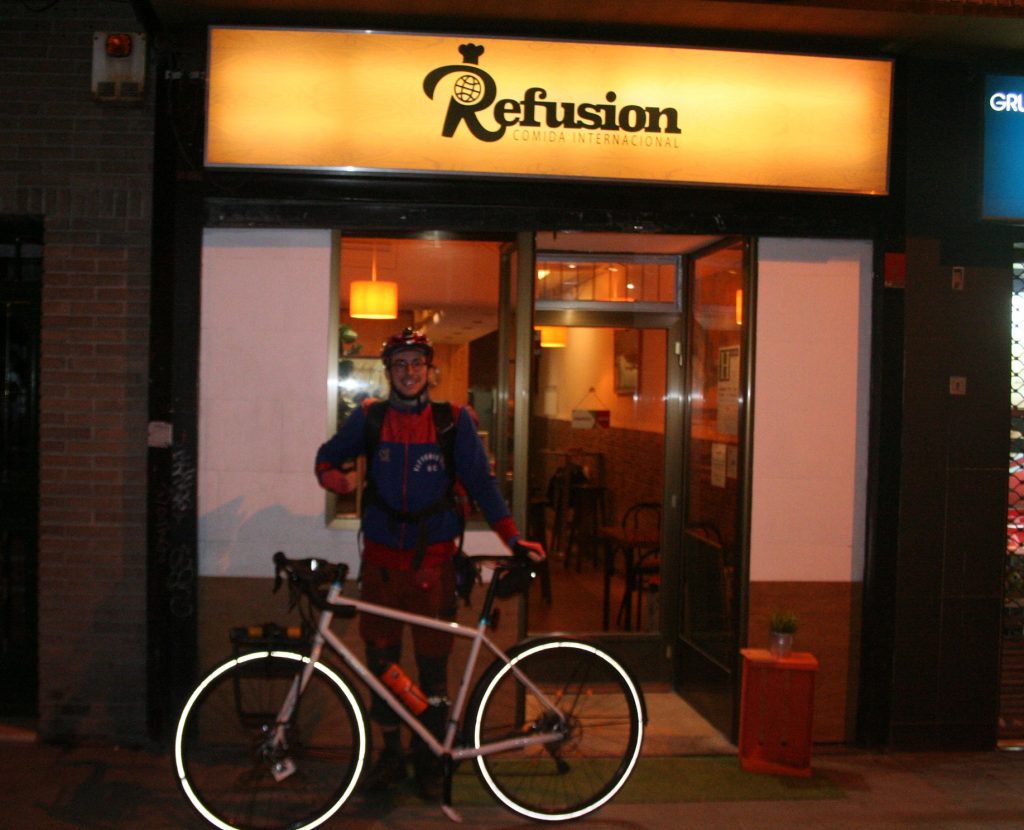 Martino, from La Pajara, outside Refusion

Everything started in 2015, during an event Christina attended as part of her full-time job with the United Nations SDG Action Campaign. She met and befriended a Syrian refugee working as an intern and was shocked to see that many of the influential people in the room had nothing constructive to say to the woman.

Having always engaged with refugee affairs from a slightly removed position, Christina felt driven to do something active.

So she posted on the largest English-language Facebook Group in Madrid—which she also happens to have created—and called out for clothing donations.

Empowered by the positive response, she set up a new Facebook group focused on the Syrian crisis. This evolved into an offline meet up—to see, as Christina jokingly says, “how many people would turn up from the internet.” It ended up being 80 people, who naturally split into teams and started brainstorming how best to help. 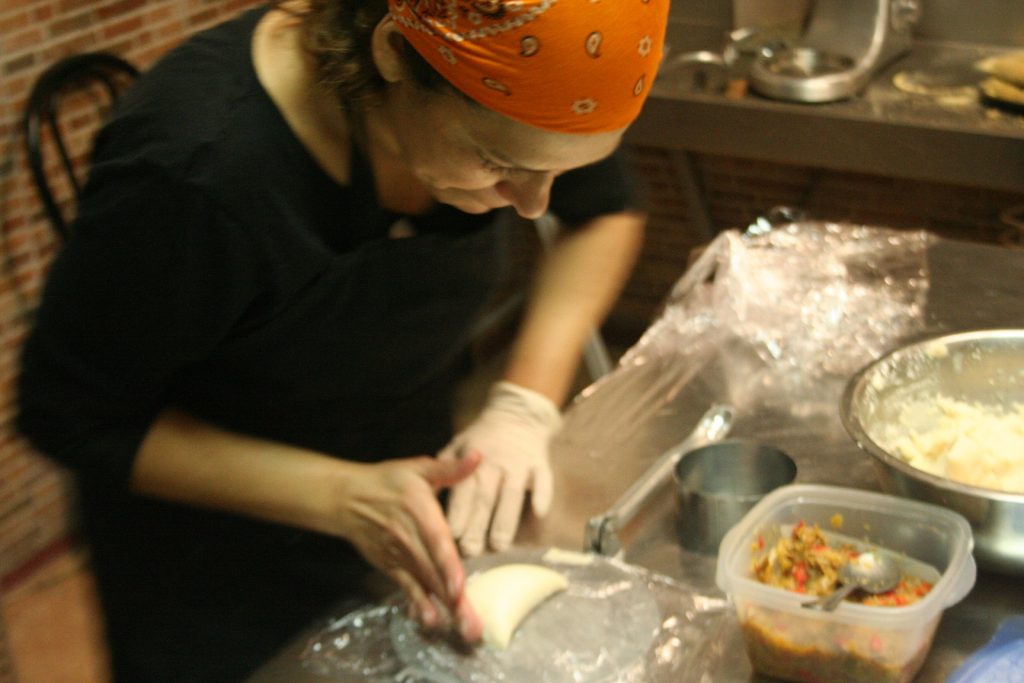 The project grew organically from there. The team was introduced to a refugee centre in Vallecas, one of the more deprived areas of Madrid, and decided to focus donation efforts locally. Action broadened to include language and music lessons, fundraising parties and even a six-month coding programme, which teaches refugees a transferable skill that can be used remotely and help find employment without a degree.

At some point, a volunteer wanted to integrate food into the offering, and Chefugee (Chef Refugee) was born. Cooking classes and pop-up dinners in people’s homes expanded into a closer relationship with restaurants—particularly through the UNHCR-sponsored refugee food festival, in which restaurants would open their doors to a guest refugee chef for the day.

Some of the members of the MFR team went out to try something new and created Refusion. “A lot of the chefs wanted to do catering, but you can’t do it officially unless you have a professional kitchen,” Christina said.

Their first thought was to be a shadow kitchen—a place that cooks, but doesn’t accept the public—but decided to plump for a space with a local presence and city-wide reach. Things started slowly, before national press coverage from newspaper El País brought a level of interest that “changed our whole lives.” Orders are now so consistent that Refusion has two trainee chefs, Souhaib from Morocco and Daniel from Venezuela, who work alongside Yoli, Ahmed and Refusion’s Head Chef, Hala, who is Syrian-Palestinian from Damascus. There are also plans to take on an additional chef to cover peak times. 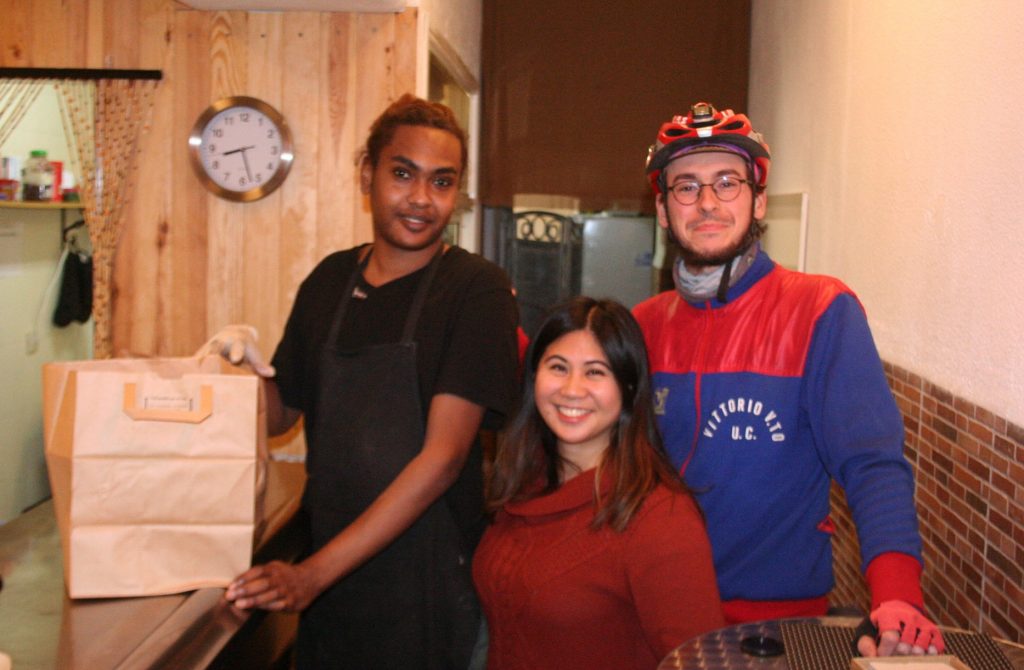 Although Refusion relies a lot on time volunteered by the five co-founders, the team can see that the only way is up: The restaurant is based in Castellana Norte, an area that Madrid is keen to make “a small Manhattan.”

More importantly, it’s clear to anyone who spends time in Refusion how much the project means. Far too often, asylum seekers in Madrid are at the mercy of an inherently uncaring system, thrown from job to job with exploitative short-term contracts and unscrupulous bosses. Refusion is remarkable for having done the exact opposite: created stable, just and empowering employment for refugees. When the business makes profit, the chefs are even in line to become shareholders.

Christina concluded, “What we really hope is we can maintain the momentum and to focus on more deliveries during the day to reach more sustainable income.”

** Global Shakers will soon be publishing a story about La Pájara.