The world is starting to take note when it comes to environmental damage caused by plastic pollution. One country after another is banning plastic bags, single-use straws and plastic cups, but we still need to do more to make molehills out of the world’s plastic mountains.

Plastic cutlery is also part of the problem and is still widely used for convenience by food vendors across the globe. Festivals, outdoor events and outlets selling lunches on the go all rely heavily on single-use plastic knives, forks and spoons.

According to the Natural Resource Defence Council, more than 100 million pieces of plastic utensils are used by Americans every day, and they can take up to 1,000 years to decompose.

Reusable solutions are the answer, but who wants to carry around a full-sized cutlery set with them?

Outlery’s solution is collapsible and portable cutlery and chopsticks that can be screwed together in seconds when it is time to eat. When the set is dismantled and returned into its tiny tin (made from recycled tin), it becomes the world’s smallest cutlery set. 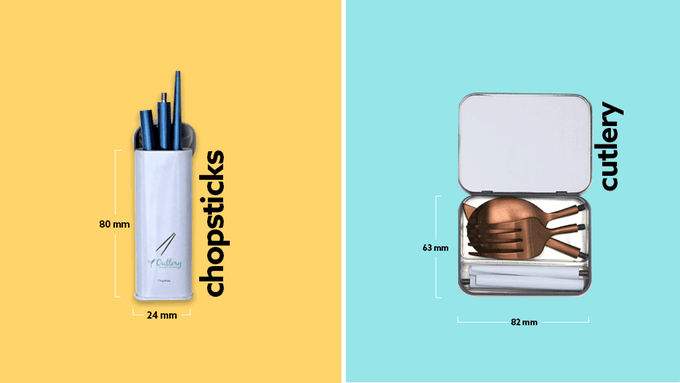 Made from easy-to-clean stainless steel, the set can fit into the tightest of pockets, meaning no excuses.

The sets are also surprisingly stylish for transportable cutlery and come in six sleek colours.

The creators of Outlery, which is based in Ireland, set a humble Kickstarter Campaign goal of €5,000 when they launched the project on 7th May 2019. However, backers have gone bonkers and at the time of writing have pledged €1,004,059, and there is still one day to go.

The company currently has a patent pending for its design and plan to start production in August with deliveries commencing in November.