‘Snapchat Tamagotchi’ Could Change How Teenage Girls Think About Tech

Imagilabs has created a fully programmable fashion accessory that will teach girls to code in a fun, gamified way.

Our world is totally, irreparably digital. Those born this century have never really known a world without smartphones, let alone without the internet. We have no problem using the same devices for work and leisure; the most precious commodity in the world is data, and it’s increasingly difficult to distinguish where life begins and online personas end.

But there’s a big and unresolved social issue: Just 18% of computer science professionals in the US and the EU— i.e. the people making and shaping this digital reality—are women.

The Sweden-based company has long been pushing to increase the proportion of women studying and working in science and engineering. It is now crowdfunding for a new gadget that it believes can turn the tide and make programming fun for girls.

“There are tools for kids and for adults, but nothing just for teenage girls,” duo Dora Palfi and Beatrice Ionascu, the co-founders of Imagilabs, write on a Kickstarter funding page. “Teenage girls want something relevant to their daily lives.

“We are here to create that.”

The result is a pleasing and beautifully compact device, dubbed ‘imagiCharm’. Aimed at girls aged 12 to 16 years old, the fully-customisable box of 64 LEDs can be programmed to look like any pattern, shape or animation—even to light up in a specific way when users receive a Snap or an Instagram notification. It’s built to be pulled apart and remade, then attached to bags, earrings, headphones or clothing. 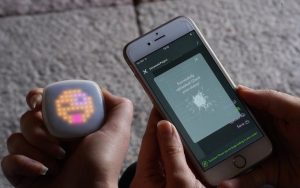 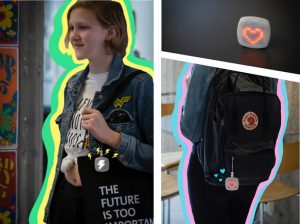 The box is controlled via a mobile phone application and Bluetooth technology, with lessons working like ‘levels’ to be unlocked through a game-like environment. Girls are encouraged to share and comment on each other’s designs through a virtual community space, meeting other girls with an interest in technology and even trying out each other’s code.

As the ‘players’ delve deeper into imagiCharm, they learn more about the real programming language of Python—a skill which can then be used for websites, web applications and complex scientific projects.

“We are creating more than just an accessory,” ImagiLabs writes on its Kickstarter page. “We are creating a movement of girls who want to shape the future of tech and change the world!”

The company aims to follow up the crowdfunding appeal with mass production in November, before starting shipping in December 2019.