Smartify, “the Shazam of the Art World”

The Smartify app is using augmented reality to deepen users’ connection to art.

Launched in 2017 by art enthusiasts Anna Lowe, Thanos Kokkiniotis and Nick Mueller, the app Smartify has been described as “the Shazam of the art world” for its ability to identify the title and artist of thousands of artworks.

The award-winning app allows visitors to museums and art galleries to scan artworks with their smartphone camera to find out more about the artist and what is going on in the scene.

Smartify does this by cross-referencing the scanned image with a vast database that the company is constantly updating.

The app is already in use for 2 million artworks in over 70 art institutions around the world, including the National Gallery in London, the Rijksmuseum in Amsterdam, The Met in New York and LACMA in Los Angeles.

While many museums and galleries have apps to guide visitors and give more information about their collections, Smartify works in partnership with museums and institutions across Europe, the US, Iran and Singapore.

The app’s image recognition tech creates “visual fingerprints” to differentiate between each artwork by reducing it to a set of digital dots and lines.

At London’s National Gallery, National Portrait Gallery and the Royal Academy of Arts, you can now read or listen to extracts while still perusing certain paintings in real-time thanks to an AR overlay. This feature is currently only available in these galleries with plans to expand it to others soon.

In a recent Apple Featured App article, Thanos Kokkiniotis said that he hopes such features deepen visitors connection with art:

“We got excited about AR because now we have the ability to overlay information about the artwork — and have the narrative while you’re enjoying a real-life painting.”

Rebranding smartphones as engagement rather than a distraction

Museums and art galleries, while being hugely important to every society for their ability to tell stories of the past and portray the present, are still somewhat resistant to some inescapable areas of modern life — namely smartphone usage.

This is despite the fact that when we have a spontaneous urge to look up and learn more about a famous work of art, most of us will turn to a smartphone for answers.

Smartify says: “We know that the use of phones in museums is still controversial. So we use the latest technologies and simple design to create a non-intrusive experience. Our ambition is to re-frame the use of smartphones as engagement rather than distraction, and to help museums build new audiences and revenue streams.”

Our lives have become duel, where we exist in both the real world and the internet world. With a generation so heavily reliant on the latter, tech is becoming a viable solution to help us connect with real life.

Art is for everyone 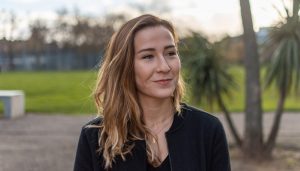 Lowe’s Prime Minister appointed role began on 1 March 2019 for a period of four years and at 28 makes her the youngest serving board member at a UK national museum or gallery.

“I am thrilled to be appointed Tate’s first Trustee with a focus on young people,” the digital strategist and trained arts educator said in an announcement.

“I am joining the board at a time when we increasingly live both online and off, empowering many young people to find their own platforms, connections and represent themselves. I look forward to supporting Tate in becoming an enabler and amplifier for the creative energy of young people.”

In the aforementioned Apple article, Lowe explained that while there are millions of visitors going to museums every day, current visitor experience uses outdated technology:

“When you approach a painting you might be curious to know more about it, but the wall label is very small and you might not want to ask the staff. You often leave forgetting the name of the work and the artist immediately.”

“At the same time, museums are struggling to engage their audiences: to understand trends, the most interesting works. So, we provide that data back to museums.”

Unsurprisingly, the most Smartifed artworks in the world are Leonardo da Vinci’s Mona Lisa, and in the UK, it’s Sunflowers by Vincent Van Gogh.

For the founders, the app evolved out of a love of art and sharing the amazing stories behind historic artworks which they believe everybody should have the right to enjoy.

“It’s definitely about the democratisation of art,” added Lowe. “We both had that feeling of looking at an artwork and thinking, ‘I wish I could get more information about this.’”

With their impressive presence in art institutions around the globe and audio, video and text commentary in more than 20 languages — Smartify is a truly international app using tech to bring people closer to the world’s most impactful and important artworks.

Plus, you don’t have to physically be in a gallery to learn more about a piece of art. By scanning a postcard of Mona Lisa, the app will still bring up the info just as if you were standing in front of the real thing.