Scientists at the University of Bath have developed a handheld saliva test that could save the lives of those experiencing the devastating effects of Spice.

Spice is a synthetic cannabinoid receptor agonist that has been named the “zombie drug” by the press for the way that it affects users.

The synthetic drug is commonly made using a range of chemicals and can have severely debilitating effects leaving users incoherent and in a zombie-like state, or even an induced coma.

The super-cheap drug poses a significant public health threat and has become disproportionately rife amongst the UK’s most vulnerable and poorest communities.

Spice is used almost exclusively by people in prison and the homeless. The Guardian reports that in Manchester, an estimated 95 percent of all homeless people use it.

Sold as a “legal high” in the first internet drug craze of the late 2000s, all variants of Spice were finally banned in the UK in 2016 and classified as a Class B drug, but this only made the sale of it more lucrative. 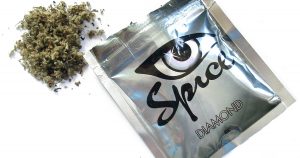 Despite this, Spice remains popular amongst the UK’s homeless for its ability to send users into oblivion—a place of nothingness that might be desirable to someone sleeping rough in a freezing cold car park.

When a user experiences fatal effects from the drug, a fast response is vital. Until now, there has not been an on the spot test for Spice. Therefore, a precautionary approach is often followed, which means the optimal course of treatment might not be found in time to save the sufferer’s life.

Spice can be made from a mixture of more than 100 man-made chemicals, which is why it can be so difficult to test for. Urine and blood tests done in a laboratory can detect its presence, but these can take days to process.

Thankfully, scientists at the University of Bath have developed a handheld saliva test to be used by paramedics and homeless services to detect whether someone has taken the drug on the spot with instant results.

University of Bath senior lecturer of pharmacy and pharmacology Dr Jenny Scott said: “Detection and confirmation of spice use early on when someone is found incoherent gives a chance to start timely treatment for their symptoms. Further down the line, we can foresee the kit being used as part of a care pathway that avoids the need to hospitalise some patients if appropriate healthcare can be given where they are.”

The device would see testers take a saliva sample that would be placed in a special holder hooked up to a laptop.

The machine would then use the chemicals in that sample to search for signs of use of the various different drugs found in the Spice family.

The saliva test only takes around five minutes to complete. It can identify whether Spice has been smoked recently, and, if so, which variant was used and how concentrated the dose was.

The research team is now further developing the prototype to optimise it for use in clinical settings and hope to trial it with medical professionals in 2020.

University of Bath senior lecturer of biology and biochemistry Dr Chris Pudney said: “We’ve proved the concept with a test that’s simple and very accurate. The hardware is compact and portable and the results are easy to understand. We’re working on software now so that the user has a simple ‘one-click’ way to use it.”

This Device for Opioid Overdose Automatically Administers the Antidote

DotLab is Designing a Non-Invasive Option to Revolutionise Endometriosis Testing