Project Tamar, based on 1000km of Brazilian coast, has spent 40 years rescuing and reintroducing endangered sea turtles into the ocean.

In 1980, a group of oceanography students in Brazil, concerned about levels of fishing and pollution, decided to check in on how local sea turtle populations were doing.

Fast forward to 2020 and this coverage has spread to 1,100km of coastline, covering the main spawning beaches. Project Tamar has a continuous presence in 26 locations in nine states in Brazil, welcoming one million people per year to its visitor centres.

The Projeto Tamar team in 1980

Some say Tamar is one of the most successful marine conservation projects in the world.

At the centre of it all is founder and director Guy Marcovaldi, whose advocacy has enlisted the support of local residents, fishermen, biologists, fishing engineers and veterinarians.

Marcovaldi is also a master diver and ocean photographer, taking opportunities during fieldwork to capture images of sea turtles and marine animals.

“It is important to remember that for every thousand turtles that are born, only one or two survive and complete their life cycle,” Marcovaldi says in a Tamar press release. “There is still much to do to rid these animals of the threat of extinction.”

This was outlined in Marcovaldi’s most famed picture, showing a diver attempting to free three sea turtles dangling from a fishing net. 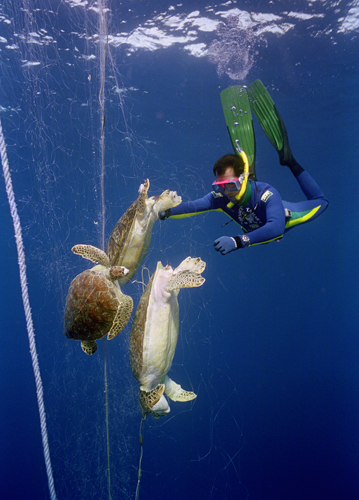 “I was informed in the main station of TAMAR that there was this net nearby in the mouth of the river and that there were lots of turtles captured in it. When the fishermen that owned the net realised how many turtles they captured, they just left the net,” he explained to the website Global Garbage.

“When I arrived at the location, the net was coming out of the water with many turtles trapped in it. With the help of local fishermen, the ones that had informed us of the net, I was able to pull the net offshore and get a better look at it, and then take a picture. Unfortunately, the turtles were all dead.”

He continued: “I dive and do underwater photography almost every day, and I never in my whole professional career had seen so many turtles dead at the same time.”

Tamar’s activities are mostly funded through work in visitor centres, selling products like craft products made by fishermen’s families and hosting environmental awareness and education courses. The tanks and aquariums are used for school visits, with students from primary to university age.

The organisation is also part of the Network of Projects for Sea Biodiversity, which also includes projects to protect the albatross, the humpback whale, corals and the spinner dolphin. Much like Tamar, these initiatives are sponsored by Brazil’s state-controlled oil giant Petrobras.