Arshak Makichyan has spent 33 weeks striking for the climate -- and until recently, doing so alone. But he’s just been arrested and faces up to 10 days in prison.

In September 2019, a year after Greta Thunberg began her climate strike, millions of young people around the world hit the streets to protect the environment — from Germany to Uganda, India to Peru, Australia to the US.

One country yet to see a similar wave of activity is Russia. At its peak, during the global strike, an estimated 700 people across “several dozen” cities called for environmental action — a strikingly small number for a country with a population of 146 million.

The turnout for regular climate strikes has been even smaller. In Moscow, for months on end, there’s been just one participant: 24-year-old violinist Arshak Makichyan. 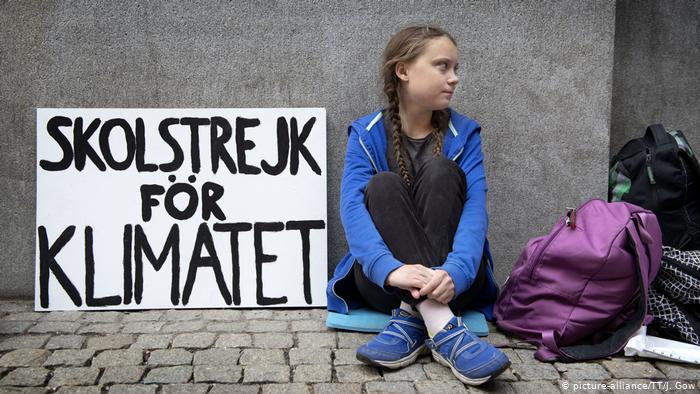 For 33 weeks, Arshak has taken to the main square with a cardboard sign reading, “Забастовка за климат” (climate strike). Despite huge online support, high-profile NGO endorsements and apocalyptic news of wildfires and floods raging in Siberia, the local reaction has been lukewarm.

Part of this is a sort of national malaise. Analysis in the BBC suggests global warming is not that important to people in a freezing country who are more worried about “high prices, poverty and corruption.” Politicians have also talked up the benefits of rising temperatures as a way to open up possibilities for shipping and energy exploration in the Arctic.

Then there’s the other problem: fear. In Russia, a protest — defined as two or more people championing a single cause together — is illegal unless approved by the local Government. As others grew interested in Makichyan’s strike, they found an innovative and legal way to support him: standing in a queue and taking it in turns to strike for a few minutes each.

Arshak Makichyan tweeted earlier in October that he had applied for a mass strike for at least the second time and had been refused — but would strike anyway.

“Don’t worry for us. There is no time for games and bureaucracy,” he tweeted on 22 October. “It’s climate emergency and there is no future if we won’t fight for it.”

There will be a trial and I can be arrested for up to 10 days or fined, but for now I’m free.
Why were we detained? For 3 person standing on the square.
We’ve sent an apllication for a mass strike and they refused us illegally. What else can we do? pic.twitter.com/0HjCM7QMqy

The result — perhaps inevitable — was a warning. On 25 October he was arrested for holding up his ‘Climate Strike’ sign while two people stood behind him with a banner that read ‘Climate Emergency.’

“There will be a trial and I can be arrested for up to 10 days or fined, but for now I’m free,” he posted on Twitter. “Why were we detained? For 3 person standing on the square.

“We’ve sent an application for a mass strike and they refused us illegally. What else can we do?”

It remains to be seen what this intervention will do to Makichyan’s strikes, or the willingness of others to support him. It seems unlikely that the climate strikes will ever be approved: President Vladimir Putin is clearly not interested in halting rising temperatures — at least not in the short term. The leader recently dismissed Thunberg as a “poorly informed teenager” and offered lucrative energy deals to tempt African leaders away from curbing greenhouse gas emissions.

Nevertheless, for his part, Makichyan remains as focused as ever on tackling the global climate crisis:

There are a lot of people who ask, how they can help me? But even if I’ll be jailed for 10 days, nothing terrible going to happen.
We need to help countries where people are already suffering and dying from the climate crisis. Help them, I’ll be fine. Thanks!#ClimateJustice