In a bid to raise the mood of its herd, a Russian dairy farm has strapped VR headsets to its cows.

A dairy farm near Moscow has started trailing virtual reality (VR) headsets on its cows in a bid to raise their mood and increase milk production.

It’s no secret that the life of a cow bred for meat and milk production is a miserable one.

In intensive dairy farms, cows’ physical and mental wellbeing is often compromised by periods of confinement in indoor housing, health problems due to higher milk yields and distress caused by early separation from their calves.

Aiming to improve the lives of its herd, a Russian dairy farm has strapped VR headsets to its cows. 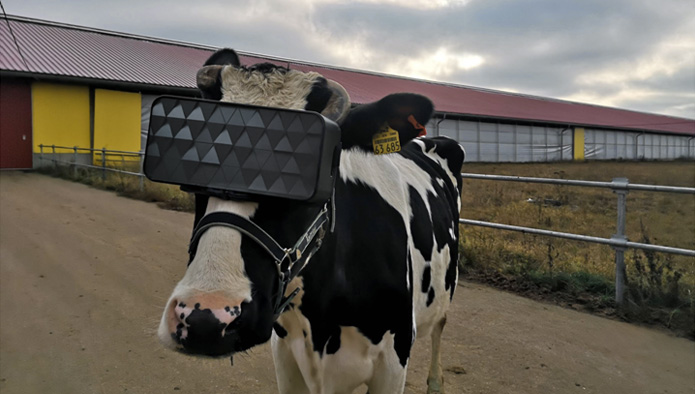 This lucky cow on a Russian dairy farm is being beamed a vision of much greener pastures.

The bovine wearables are a collaboration between farmers, developers, vets and consultants at the Krasnogorsk farm near Moscow, seeing the cows beamed a simulation of a lush field on a summers day.

The team adapted human VR glasses, taking into account the structural features of the head of cows.

The colour palette was also adjusted based on numerous studies of cattle vision that claim that cows, unlike humans, have only two colour receptors that cannot see red or green and only muted shades of blue and yellow.

The concluding study revealed “reduced anxiety and improved overall emotional mood in the herd,” according to the Ministry of Agriculture and Food in Moscow.

Later studies will observe whether this virtually induced improvement in mood has a positive effect on milk production.

In Russia, farmers are already harnessing the calming qualities of classical music to relax cattle and positively affect milk output.

The VR project comes after the country’s research into the importance of the emotional state of animals where examples from around the world show that in a calm atmosphere, the quantity and, sometimes, the quality of milk increase markedly.

The ministry referenced a study by Wageningen University employees in The Netherlands that showed how environmental conditions have a significant impact on cow health and, as a consequence, the quality and quantity of milk produced.

Also mentioned were projects in Europe that use robotic systems to ensure maximum free movement of livestock on the farm.

Source: Ministry of Agriculture and Food of the Moscow Region

Could This Pink Seaweed Stop Cows Heating Up the Planet?