Right Runner Game: Teaching Kids to Stand Up for Their Rights

Backed by UNICEF, Right Runner is a game aiming to empower kids with knowledge of their rights and encourage them to be activists.

The days of blaming gaming for producing socially inept and uninterested children may be well and truly over as the world seems to have woken up to the fact that games can be an incredibly powerful tool for education.

On 20th November 2019, on World Children’s Day and the 30th anniversary of the Convention on the Rights of the Child (CRC) – the most widely ratified human rights treaty in history — UNICEF announced the launch of Right Runner, a fast-paced mobile game application to inspire, inform and empower children and young people on their rights.

In their announcement, UNICEF said that whilst the Convention has achieved immense progress for children around the world over the past 3 decades, many, often the most vulnerable, are yet to feel its impact.

For children to be able to stand up for their rights and the rights of others to become little activists, they must first be aware of them. This kind of education, however, is often a priveledge that many kids around the world miss out on.

Right Runner is set in countries across Latin America and the Caribbean which UNICEF states is still one of the most unequal regions in the world — where barriers persist for many disadvantaged and excluded girls and boys, preventing them from accessing social services and protection. Players touch the screen to jump, slide and trick their way past oncoming obstacles.

“The most memorable way children and young people can learn about their rights is by playing,” said Bernt Aasen UNICEF Regional Director of UNICEF for Latin America and the Caribbean a.i.

“Thirty years after the adoption of the Convention on the Rights of the Child, this new mobile app provides children and young people with a fun, innovative and interactive tool to empower them to become agents of change on issues that affect them.”

This week the free to play game is “Game of the Day” on Apple’s App Store.

“With UNICEF’s Right Runner you will join a new generation of inspiring young people that are claiming their rights and leading the way to the world they deserve. A world within reach,” says the game’s introduction on App Store. 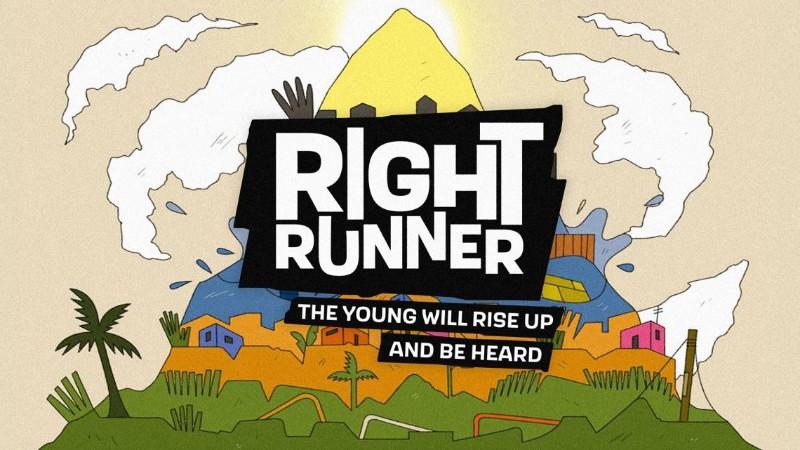 Upon starting the game players are greeted with the inspiring message: “The young will rise up and be heard.”

To claim and defend their rights which are illustrated throughout, the characters must overcome barriers and engage with others along the way. Encouragement is a constant, with phrases like “never give up!” 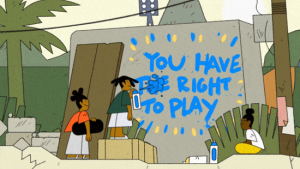 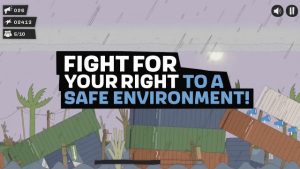 The game takes the player on an exciting journey, skateboarding through an obstacle-ridden old town, parkouring their through favelas to get to school, running to safety during extreme flooding and jumping and sliding in a dangerous graffitied city. 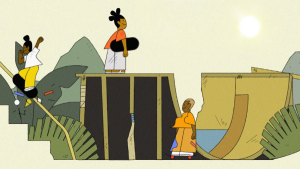 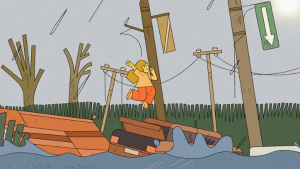 Throughout, players must collect megaphones to amplify their message.

The penultimate level sees players escaping from a surreal world of grasping hands, shadowed faces and stabbing knives — a metaphor for the fight for a life free of violence. 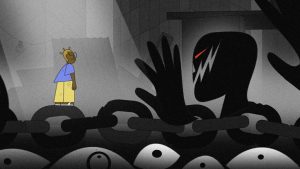 The stirring finale aimed at motivating and inspiring young people to fight for change with what they have learned about their rights, requires players to climb to the top of a mountain where they must harness the power of their own voice. 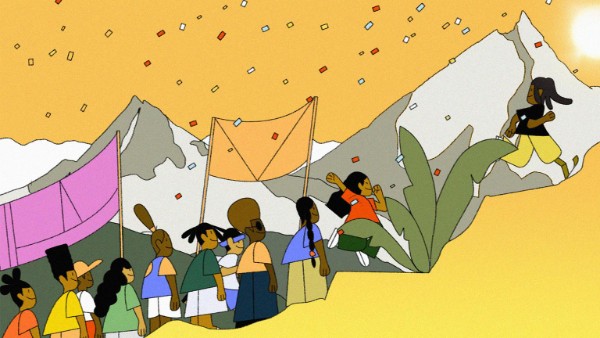 The artists at Nexus focused on designing and creating a “visual language that would resonate with the players and effectively bring the CRC to life.”

Everything from the cast of game characters to the visual and audio palette were designed to animate the elements and ambiance of the region.

“We were inspired by all of the young people around the world fighting for change. Right Runner became a celebration of every kid’s power to fight for their rights and be an agent for change,” said Deborah Casswell, Creative Director of Nexus Studios.

The app was developed with and tested by young people including UNICEF’s Global Youth Council who are tasked with advising the organization on its work affecting children and adolescents.

In addition, 70 students from the Nord Anglia Education Network Schools tested and provided feedback on the game. The voices heard in the game are from students of one of these schools which regularly collaborate with UNICEF in child rights education initiatives such as the World Largest Lesson.

Could Olli Rundgren’s Game be the Antidote to Vaccine Hesitancy?

Bad News: The Game that Could “Vaccinate” Against Online Misinformation