Loop delivers the products of popular brands to your doorstep in reusable packaging which are then picked up, cleaned and refilled.

Those that remember the days when milk was delivered to each house by a familiar ‘milkman’ will recall that it was a system that largely worked, and may perhaps wonder why it is one that has been eradicated.

Loop is a startup harking back to this nostalgic system by helping big household brands reimagine their packaging for reusable purposes.

The startup is the brainchild of Terracycle founder, Tom Szaky, who announced the idea for Loop at the World Economic Forum in Davos in January this year and launched it in May.

Terracycle is Loop’s parent company and is known as the company ‘that recycles anything.’

Set up 15 years ago, Terracycle works with consumer product companies, retailers and others to recycle literally anything, from toothbrushes to dirty diapers. It also teams up with companies to integrate hard-to-recycle waste and ocean plastic into their products and packaging.

But to save the planet from the strain of mounting single-use waste caused by decades of consumerism, even Szaky, perhaps the world’s most enthusiastic recycler, says we need to do more than recycle.

“Recycling is incredibly important,” he says. “But it’s only a short-term solution. It doesn’t solve the root cause.”

A longer-term solution to tackling the world’s waste is a move from our current linear economy to a circular one in which containers and other receptacles are reused, rather than disposed of and then recycled.

So Loop partners with brands, retailers and manufacturers to create new reusable bottles and jars for products — typically made of glass and metal. Loop then delivers these products such as orange juice, shampoo and laundry detergent to shopper doorsteps and retrieves the empties for cleaning and reuse.

Shoppers will usually pay a small deposit for a product’s container which will be refunded when it’s returned.

“Metal is bad, paper is bad, plastic is bad if you use it once,” says Szaky. This is why brands can only participate if their packaging can be reused at least 10 times.

The best things in life come in pairs. Even better when they’re @pantene!

The 41 partnering brands listed on the Loop website already include Tropicana, Pantene, Colgate, Dove and Haagen-Daz.

All Loop products are delivered in the “Loop Tote” which was designed alongside UPS with durability and functionality in mind. 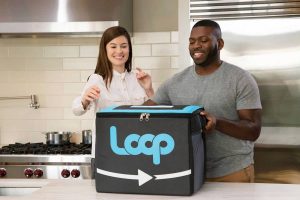 According to Forbes Loop is now shipping “under 100 products,” but expects that number to be 300-400 by the end of the year with four to five products being added per week.

Loop participating products are already lining the online shelves of stores such as Kroger and Walgreens on the East Coast, United States and Carrefour in Paris.

More Loop programs are planned for stores in Toronto, Tokyo, California and Tesco in the UK.

For Loop to work and have a real impact it is up to the consumer to ensure that they are returning packaging for refill and continually opting for refillable packaging.

Like the milkman method, Loop’s advantage is that it makes the process incredibly easy for the consumer and thanks to this the startup’s trials have been “extremely encouraging.”

“It has the same convenience of disposability,” Szaky says. “This is how we move packaging and products from being disposable and owned by the consumer to being durable and borrowed by the consumer. Packaging becomes a service.”