Shisalanga Construction is the first company in South Africa to lay a section of road that is partly plastic.

The world is catching on to the idea of recycling single-use plastics to make roads. One of the latest countries to see this innovation to reduce plastic pollution is South Africa.

In August 2019, Shisalanga Construction became the first company in South Africa to lay a section of road that’s partly plastic. The project is located in the KwaZulu-Natal (KZN) region, commissioned by KZN Department of Transport.

CNN reported that Shisalanga has repaved more than 400 meters of the road in Cliffdale, on the outskirts of the city of Durban, using asphalt made with the equivalent of almost 40,000 recycled two-litre plastic milk bottles.

Milk bottles are ideal because they contain high-density polyethylene (HDPE) — a thick plastic which proves great for making pavement. The bottles are heated to 190 degrees celsius and turned into pellets at a local recycling plant.

It is estimated that every ton of asphalt contains roughly 118 to 128 bottles and the firm says that the eco-friendly process produces fewer toxic emissions than conventional methods.

The asphalt produced is also more water-resistant and durable and can withstand temperatures as high as 70 degrees Celsius (158F) and as low as 22 below zero (-7.6F).

While a milk bottle road costs around the same as existing methods, the company believes that their recycled roads will save money in the long-run by lasting up to 20 years longer. 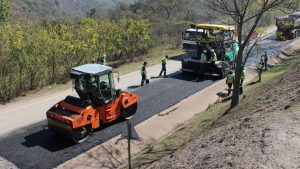 Kit Ducasse, control technician at the KZN Department of Transport said he was “impressed” with how well the road is working and has commissioned a highway on-ramp in addition to the first road.

Shisalanga has applied to the South Africa National Roads Agency (SANRAL) to lay 200 tons of plastic tarmac on the country’s main N3 highway between Durban and Johannesburg and is awaiting approval for the project.

If it meets the agency’s requirements, the technology could be rolled out across the nation and seeing as SANRAL’s standards are so high, Shisalanga hopes it would then be able to meet the strictest regulations in other parts of the world.

In South Africa where recycling is not collected from homes, 70 percent is sourced from landfill. Therefore, initiatives like this are important for creating new markets for plastic waste.

“We’re taking plastic out of our dumps and we’re reducing our pollution problem, and to top it off we’ve produced a product that’s far superior to alternatives,” said Koekemoer.