The ReCircle is a prototype home/business appliance, designed to sort, wash, and grind recycling into pure materials before selling it to manufacturers to turn back into its original product.

No matter how good we are at recycling, no matter how hard we try to ensure that all materials are separated, cleaned and deposited in the correct bins, we are constantly hearing about the ineptitude of our government recycling programmes. That’s if we are lucky enough to live in a country with a recycling programme at all. Then there are the stomach-churning reports that say most of the stuff we try and recycle just ends up in the ocean anyway.

For those that care, it can feel like a losing battle. What is the point of doing your part if the infrastructures in place are not doing theirs?

Environmental activists, researchers and thought leaders like Dame Ellen McArthur are encouraging companies and producers of things to adopt a Circular Economy model whereby we “design out” waste and pollution by reusing the materials we have already made rather than creating brand new ones from raw and artificial substances.

ReCircle Recycling is a company that wants to bring the circular economy into every home with the world’s first closed-loop recycling appliance.

“ReCircle itself is not about reducing waste – it is about never creating waste. This might seem pedantic, however, it is key to understanding how to deliver the circular economy. If waste is produced, then that is the end of the road,” Aldous Hicks, Recircle’s CEO & Co-Founder told Trend-Monitor in a recent interview.

On the 30th May, ReCircle announced that they had exceeded their equity crowdfunding goal and were now ready to commence the creation of their prototype.

Now, it’s time to build the prototype! Thank you to our investors and supporters. If you’d like to stay up to date with the progress of ReCircle – head to our website and join our mailing list! https://t.co/qQNUEViez1 pic.twitter.com/CIrXvI7qVL

The problem with our recycling systems

The current domestic curb-side recycling collection and processing system has been in operation for over 20 years in developed countries around the world.

Despite the investment of billions upon billions of dollars into the development and promotion of recycling in countries like Australia, the UK and the USA, more than half of household recyclable material is currently still not recycled and ends up in landfill, and less than 10% is re-manufactured into its original product.

To really put this into really scary perspective, according to TerraCycle, only 2% of the world’s waste is currently being recycled. (Terracycle New York City, 2017)

Why? ReCircle identifies the problem to be “the insurmountable technical difficulties in the technology needed to separate mixed and thus contaminated recyclables.”

Even in countries with good rates of recycling that occur in the household and businesses human-error means that one item in the wrong bin can ruin a whole truckload’s worth of material.

The cost of these processes in current Material Recovery Facilities (MRFs or Merfs) is not falling fast enough to ensure recycling ever becomes financially viable.

“We need recycling to become viable, and fast, to give our economies a chance at catching up with the skyrocketing amount of used-materials being pumped into our landfills and environment,” says ReCircle.

At this point in time, the decisions on the collection and processing of our recycling are made by councils, municipalities and private waste service companies. There is currently no competition and no alternative to offer to the public other than what has been decided for them.

Thus there is nothing on the market that can help ease the dirty, timely task of sorting trash and nothing to ease “environmental anxiety” for those that worry about their environmental impact.

The rates of public participation in the countries that do have recycling programmes have historically shown that people DO care and are committed to the reuse of resources.

“The market is ready for the world’s first carbon-negative, time-saving, convenience adding appliance that guarantees a 100% rate of close-loop recycling,” Says ReCircle.

According to ReCircle, their system allows for 100% closed-loop recycling of glass, PET & HDPE plastic containers, and steel and aluminium cans by guaranteeing zero contamination of used materials. 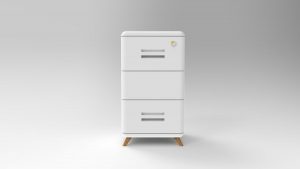 The household version of the ReCircle appliance.

“It took 14 years before I was ready to patent the product, and a further 13 years for us to be ready to finance the prototype development,” said Hicks.

ReCircle Recycling Ltd’s appliance uses the company’s patented sensor technology to ensure that recyclable materials are sorted with 100 percent accuracy. Incorrectly placed items will not be accepted, thereby removing the inevitable human error in the complicated task of identifying material types on hard to read labels.

The appliance then cleans, removes labels and processes each used-material into an easy to sell, valuable product. A ReCircle will process PET, HDPE, clear/green/brown glass and aluminium and tin cans with further materials to follow in future.

Could ReCircle Change the Game?

Such an appliance could eliminate the need for our current system that proves inefficient, unreliable and expensive. It can also ensure the possibility for 100% closed-loop recycling of packaging and containers while also retaining their value so they can be sold at a premium and re-manufactured after their useful life.

The appliance can be installed anywhere — universities, stadiums, homes and offices. Hygienic and odourless, it can also store 10 times more material than your normal recycling bin.

In the coming months, the company will be launching its next phase of crowdfunding, a campaign to develop the ReCircle prototype.

When Trend-Monitor asked Hicks what other technologies he could see emerging in coming years that will influence sustainability in home design, he said:

“The most important technology I see emerging is bio-domes. These are amazing pieces of equipment. They will provide a closed-loop water supply to households and apartment blocks.”