An "Invisibility Cloak" That Can Hide People, Buildings and Military Jets

Hyperstealth Biotechnology says that "invisibility is the new camouflage."

Invisibility is no longer confined to the fictional wizarding realms of Harry Potter. A Canadian camouflage company has made it a reality.

Quantum Stealth is a patent-pending material that can make a human or an entire building completely invisible by bending light waves around whatever it is you want to hide.

The material removes not only your visual, infrared (night vision) and thermal signatures but also most of the target’s shadow.

The light bending material is made by Hyperstealth Biotechnology Corp and is aptly known as the “Invisibility Cloak.”

Set up in 1999, Hyperstealth is a leading supplier of camouflage patterns to militaries around the world with over 14,000 pattern designs which were all created by Guy Cramer, the companies president and CEO and the mind behind the “Invisibility Cloak.” 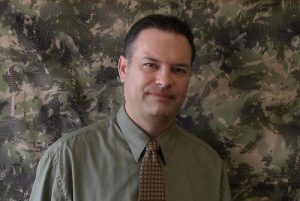 Notably, Cramer is the grandson and former research assistant of Donald L. Hings, the inventor of the walkie-talkie and 56 other patents.

With innovation running through his veins, he began to develop his own military camouflage based on mathematical fractals (feedback loops) in 2002. A disruption that took camouflage into an area of science.

In 2011, Cramer started to develop Quantum Stealth. In October 2019 he applied for four patent applications relating to the material, which will primarily be used for military purposes — to conceal agents and equipment such as tanks and jets in the field and is currently pending patent approval.

As well as making objects close to invisible to the naked eye, the material also hides them from infrared and ultraviolet images.

“True invisibility was thought to be impossible by most physicists,” Hyperstealth stated in their patent application announcement last year.

“Not only does the material hide a target in the visible spectrum but Guy demonstrates that it also bends in the Ultraviolet, Infrared and Shortwave Infrared while it blocks the Thermal Spectrum, making it a true ‘Broadband Invisibility Cloak.'”

“There is no power source. It is paper-thin and inexpensive. It can hide a person, a vehicle, a ship, spacecraft and buildings. The patent discusses 13 versions of the material and the patent allows for many more configurations. One piece of Quantum Stealth can work in any environment, in any season at any time of the day or night, something no other camouflage is capable of.”

Quantum Stealth makes things invisible through a lenticular lens – a corrugated sheet in which each ridge is made up of a convex lens.

You may have seen such material on those tacky 3D bookmarks or football cards you collected as a kid.

In the case of Quantum Stealth, the sheets are left clear and layered in such a way that they can reflect light from so many angles to create “dead spots.”

Light can no longer pass through these points, hiding the subject behind them from view while the background remains unchanged.

Viral videos of Cramer’s “Invisibility Cloak” material demonstrate the incredible ability for it to conceal objects even when the sheets used are very thin.

However, there are still some things to iron out before it can be applied to clothing to replace traditional camouflage. Currently, the subject must be a certain distance away from the material for it to conceal it.

“It won’t be clothing yet due to the stand-off distance required. I would give that about an 80 per cent probability at some point in the future,” Cramer told Dezeen.

The material is currently in the prototype stage but Hyperstealth is in the process of working with manufacturers to streamline the product with Cramer estimating that it will be ready for most applications towards the end of 2020.

This includes being used to create items such as riot shields, camouflage nets, parachutes or pop-up tents.

Another patent that the company applied for relating to Quantum Stealth is a new “Solar Panel Amplifier” which uses the same lens material that is a key component of all four patents that Cramer applied for last year. It has demonstrated to provide more than triple the energy output of solar panels.