Until recently, Focus 1 headbands created by BrainCo were being used in a primary school in China to track students' focus.

China is trailblazing novel uses of advanced technologies like artificial intelligence, machine learning and facial recognition throughout all areas of society. One area, though, appears to be a particular testing ground for these technologies — China’s primary education system.

An extra controversial example of this is the recent use of brainwave tracking headbands in Xiaoshun Township Central Primary School in Jinhua, a city in Zhejiang province that was reported on by Wall Street Journal last month in a video that received over 1 million views.

“While many parents and teachers see them [AI cameras and brain-wave trackers] as tools to improve grades, they’ve become some children’s worst nightmare,” stated the video description.

The headbands in the spotlight are called Focus 1 and were created by BrainCo Technology, a company with offices in China and the US.

They claim to be able to inform teachers and parents on how focused students are on their studies by detecting their brain signals — different coloured lights display the students’ varying levels of concentration.

They were donated to the school by a former pupil named in media reports as Kong Xiaoxian, an investor in BrainCo. The school had been given 50 headbands and pupils reportedly only wore them once a week.

Last week, South China Morning Post reported that the company defended its device saying that people had misinterpreted the WSJ story which sparked a furious online debate over the use of such technologies on children and China’s status as a surveillance state.

The device has three sensors, two behind the ears and one on the forehead.
“The headband is similar to devices used for detecting brain waves of patients in hospitals for medical assessments,” Han Bicheng, founder of BrainCo recently told a Chinese news site.
The WSJ stated that these sensors pick up electrical signals sent by neurons in the brain and then the neural data is sent in real-time to the teacher’s computer.
On October 31, the public relations manager at BrainCo responded that the product is a concentration training system, not a system for monitoring.

“What did these children do wrong to deserve this life of constant monitoring? It boggles my mind that we can’t put ankle bracelets on paedophiles, but it’s astonishingly easy to put headbands on these powerless kids,” one commenter posted on Weibo. 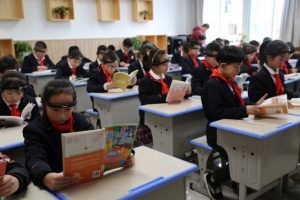 Now, after an overwhelming wave of criticism on state and social media off the back of the WSJ report, Xiaoshun Township Central Primary School has halted the use of the headbands under the direction of Jindong District Education Bureau.
The Guardian cited state-run newspaper Beijing News, which quoted a teacher named Zhang as saying the experiment had been going for a year and that data was also transferred to a company server but the full data was not shared with parents.

“All we are doing is providing some assistance for the students to see how much they are paying attention,” Zhang said. “Because the data is transferred to the teacher, the students will concentrate more than usual, and we’ve indeed seen some improvements.”

Many don’t share this teachers’ point of view saying that these types of techniques can work to severely damage a child’s confidence and self-esteem.

” It will cause a great psychological burden to the students. Over time, the psychology is likely to collapse, and it does not respect the students’ privacy.”

Another said, “If I am a child, this thing suddenly lights up in class, the teacher yells at me, and my self-esteem is insulted. What kind of shadow does this have to leave for my childhood?”

In response to doubts that the headband will cause psychological stress,  the company said that it does not need to be worn for a long time, and it can be worn once a week.

Other Weibo users expressed that the onus is on teachers to ensure that they are engaging students in ways that help them learn.

“Every child is different and it’s the teacher’s job to teach in line with the student’s ability,” wrote one Weibo user.

“Some children are more curious and have shorter attention spans. Is that a problem? Shouldn’t it be more import to guide children to find their interest?”

It is not known if and when the Focus 1 will be seen in Chinese schools again but reports indicate that their use has been merely “suspended” while investigations continue.