Oddbox is a subscription food box that gives a home to "ugly/wonky" produce that supermarkets believe customers are too fussy to buy.

After eating an incredibly ugly but wonderfully delicious tomato in Portugal, British couple Deepak Ravindran and Emilie Vanpoperinghe got to thinking — “why fruit and vegetables in the UK looked appealing but never tasted that good.”

Ravindran was soon appalled to discover that the food production industry generates huge amounts of perfectly edible produce, just to have up to 30 to 40 per cent of it refused by supermarkets because of supposedly ingrained, fussy consumer habits.

Food waste has become a global concern. So much so that one of the United Nation’s sustainable development goals (12.3) is to halve the per capita global food waste by 2030. An important commitment seeing as just 25% of all food wasted could feed all of the malnourished people in the world and that food waste also accounts for 8% of all greenhouse gas emissions.

The UK alone sends 90,000 tonnes of produce to landfill, according to the Waste and Resources Action Programme. But this produce is never recorded as supermarket waste, because it is rejected before it hits the shelves.

“Supermarkets everywhere said it was a supply and demand equation and they sell what people want to buy,” Ravindran told the Independent. “But customers say they don’t have a choice, while growers say they do what supermarkets ask them.”

The couple suspected that there were a lot of people in London who wouldn’t mind giving ugly, wonky veg that didn’t meet supermarket standards, a more beautiful future and they were right…

In May 2016 Ravindran staged a trial. He bought rejected fruit and vegetables from local suppliers and farms at “a fair price,” and put together boxes for 20 households near his home in Balham, delivering to them once a week for six weeks.

The trial was successful enough for the couple to decide to pool together their money and set up Oddbox — the subscription box that delivers delicious, misshapen and surplus produce straight to your door. 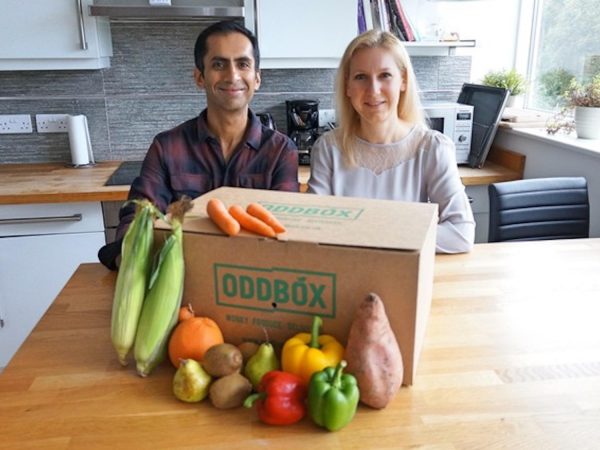 Since then, Oddbox has gone from just a handful of customers and suppliers and packing their boxes in a small room every Saturday morning, to delivering over 25,000 boxes across London.

By 2022, the couple’s goal is to capture 5% (500,000 tonnes) of the pre-farm gate produce waste (fruit and vegetables lost or wasted before they leave the farm) in the UK and the EU via “innovative solutions that provide a social, environmental and commercial benefit for all involved.”

So far, Oddbox has grown a network of more than 50 suppliers based within 200 miles of London, including some of the biggest names in the UK produce industry, such as G’s Fresh, Produce World and Thanet Earth, to buy produce direct from source that is either surplus or doesn’t meet supermarket specifications.

The demand for imperfect fruit and veg is growing rapidly meaning that Oddbox is now on the hunt for additional suppliers to expand to the rest of London (the startup currently operates in 60% of the city) and nationally.

To ensure there is zero waste, any unused produce is donated to Oddbox’s charity partners City Harvest and the Felix Foundation to feed those in need.

“We’re the only veg box for wonky and surplus produce, and we focus on making opportunities from produce that’s already been grown, rather than asking producers to grow for us,” Vanpoperinghe told Produce Business UK. “As we expand, our intention is to have a larger and larger impact.

“Any profit we make is reinvested in to the business to be able to grow and rescue more produce. We want to help solve the food waste crisis, to ensure that any produce that’s grown finds a home, and to help people to reduce their impact on the environment.”

“The Pig Idea” That Could Dramatically Diminish Food Waste by 2030