Users of the Nextdoor App are harnessing it to support their communities, but recent reports show that during the coronavirus pandemic, the app has its downsides.

The app, which is available in 260,000 neighbourhoods across 11 countries, including the UK, US, Australia and many European countries, has seen a surge in use following the global spread of the coronavirus outbreak and, in response, has added 2 new features to give people a better way to support one another.

The “Help Maps” feature allows neighbours to coordinate aid between those in need, like the elderly and at-risk, and those willing to lend a hand — like running errands or dropping off supplies. The second feature, “Groups,” allow smaller groups and tight-knit communities to network outside of the main feed. 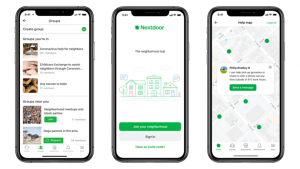 Help Maps harnesses Nextdoor’s existing map-based feature that also offers a map of real estate listings and runs fun annual features, like the Halloween Treat Map or Holiday Cheer Map, which shows the houses that are decked out with Christmas lights or other holiday decorations.

Instead of listing your house, Help Maps allows users to list the services they are willing to provide.

Members who add themselves to the map can then list the errands they could run or the other sort of help they can provide — from a friendly check-in phone call once a day, to delivering groceries or picking up prescriptions.

Similar to Facebook Groups, Nextdoor’s “Groups” allows communities to organise around topics, interests, providing aid or anything else. But unlike Facebook, which doesn’t have an official way to confirm people are who they say or their address, Nextdoor validates users by phone or postal mail.

Using the feature, neighbours can organise either by their specific neighbourhood alone, with other neighbourhoods nearby or on a city-wide basis.

Nextdoor recently launched Groups out of Beta, but Techcrunch reports that neighbours were already beginning to use the feature for COVID-19 related activities, including sharing which shops had toilet paper in stock, offering ways to unite communities and allowing parents to help kids stay connected during school shutdowns.

The app, which launched in 2011, closed $170 million in growth funding in September last year, being valued at $2.1 billion. It was also announced that internet trend guru and prominent venture capitalist Mary Meeker had joined its board.

On 18th March, CNN reported that the company had seen a significant increase in user engagement in the previous two weeks (up 80%), especially in areas hit hard by the virus, such as the greater New York City and Seattle.

App downloads are growing too, and at the time of writing, Nextdoor is ranking at number 6 in the App Store Top Charts.

While the app could undoubtedly be a lifesaver for many vulnerable people in isolation, unfortunately, Nextdoor is spreading more than neighbourly kindness, with some conversations around COVID-19 occurring on the app are proving to be counterproductive.

As the New Statesman reports, misinformation, conspiracies, bad health advice and more have spread on the app, which doesn’t have the moderation capacity or resources of a company like Facebook.

“People on Nextdoor are freaking out about coronavirus,” reported a recent BuzzFeed story, while CNN called the app a “hub of anxiety.”

“People are social-distance shaming anyone they see, such as joggers outside their windows or kids on the street who aren’t staying far enough from each other,” The Washington Post reported.

In the app’s reviews on App Store, one user wrote that she originally thought the app was a good idea but found that it “highlights the bigotry, racism and arrogance” of her neighbours, suggesting that people were biased as to whom was safe to accept help from.

To help stop the spread of misinformation and panic, Nextdoor announced it would show information from health experts when people post about COVID-19. Users can also report fake coronavirus posts directly on the app, the company says.

The company recently launched the #ICanHelpChallenge to help further realise their purpose to “cultivate a kinder world where everyone has a neighbourhood to rely on,” during these trying times.

Remember, it is our responsibility to ensure we are using useful tools like Nextdoor to spread kindness, not panic.