The Norweigan “Horse Girl” Breaking Barriers in the Equine Industry

Mona Skisland's EquiConnector is a digital platform that acts as an Airbnb for horses to make the equine industry more accessible.

Mona first got on a horse at 5 years old and almost immediately, she fell off.

“I must have hit my head or something,” she tells Global Shakers with a laugh. “Because I wasn’t put off.”

“From that moment I was totally obsessed with horses.”

Seeing as her parents were not really “horse people,” the pony-mad Mona soon saw issues within the equine industry that she would have to rectify when she grew up.

“By the age of 6 or 7, I had already started to make business plans,” she said. “Very early on I noticed a lot of barriers to horses — firstly that they are super expensive and stables are often far away, making them inaccessible.”

Years later, a master thesis and a lifetime of experience uncovered two main problems — the outdated and inflexible operations of most stables and a stark lack of communication.

“Its everything from the layout to the way things are run,” she explained. “If you had a lean consultant in there, they would do the opposite.”

Equine centres tend to be a little stuck in the past and steeped in tradition. Someone outside of the horse community might really struggle to get in touch with their local stables as many lack fully-staffed offices, functional websites or a social media presence.

It is both difficult for beginners to get into the sport and for equestrians to stay in it.

Based on a sharing economy concept, and described as an Airbnb for horses, EquiConnector is Mona’s digital solution aiming to “fix the equine industry.” 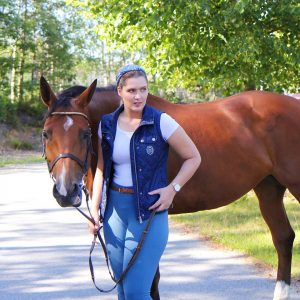 The rest of Mona’s childhood and early adulthood continued to be all about horses and she built a CV that would impress anybody in the equine industry knowing that one day, she would find a way to improve it.

Getting her own horse at age 10, she started show-jumping at a high-level and at 16 she became a riding instructor.

Working her way up at several stables she advanced to become the head of economy and development at an equestrian centre, all while completing a bachelor’s in marketing and leadership.

She got a few more horses, including Victoria, an extra challenging horse that she trained from scratch, and continued to learn about the powerful animals and the historic business of riding them. 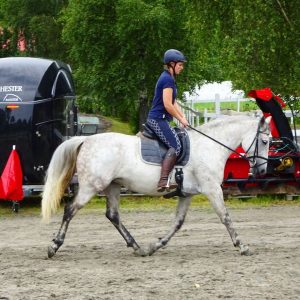 Then, came a turn in the tracks…

“I was starting my master’s in innovation and equine business development and Victoria died.”

“She was the one I was regularly riding. It was so unexpected because she was a great horse and everything was so promising.”

Grieving and depressed without her companion and her sport Mona felt at a loss. As a student, she didn’t have the money to buy another nor the time it takes to “break-in” a new horse.

From speaking to other horse people and from research for her master thesis,  Mona found that her painful situation was not an unusual one for riders these days:

60 % of equestrians in Norway have been involuntarily out of the sport for more than 6 months.

This is despite 90% of horse-owners finding it difficult to find riders for their horses.

Reaffirming Mona’s complaints around the disconnect in the industry 80% agreed that it’s hard to find equestrian activities.

Having been in the industry since 5 years old, Mona knew tonnes of people in her network that needed help with their horses and many centres that had horses available.

“If I had an afternoon off, of course, I could pick up my phone and call 20 people asking if they had any available horses, but this is very time-consuming.”

Even though this is something that everybody in the horse community does, Mona explained that it isn’t good practise — you should always sign a contract for direct insurance when you use someone’s horse or take a lesson and then there is the matter of payment.

Mona recalls that beautiful sunny Sunday in 2018 while she was strolling through the Norweigan countryside past horses roaming in the fields.

“There were no people around, the weather was perfect and I really, really wanted to ride,” she said. 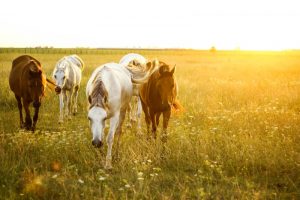 Frustrated, Mona realized there was an app for everything, but not for this situation — a rider needing a horse and horses needing a rider.

“Why couldn’t I just take out my phone and find out where there were available horses to ride?”

From there it all clicked and the idea for EquiConnector was born — a service that allows equestrian centres to manage all of their activities for booking on one platform and handles payments and the signing of waivers.

She went straight home and wrote a business plan, but being pragmatic, she decided to do things “properly” and have the “right” amount of savings, so put the plan in a drawer.

Soon after, Mona got a job as a marketer with an offshore firm where she got to meet a lot of entrepreneurs. Meanwhile, her master’s in innovation was throwing her into an exciting world of start-ups.

A friend persuaded her to go along to an incubator where she ended up speaking to people about that idea she left in the drawer.

“They were so excited. They wouldn’t let me out of there without a contract.”

Two months later she was awarded 1m Kr ($100,000) grant from the Norwegian Research Council thanks to her master thesis based on sharing economy in the equine industry.

This month, the EquiConnector team celebrated their 1 year anniversary. 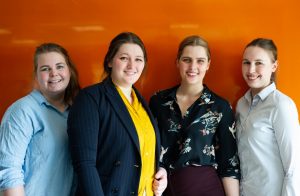 The power of horses

It’s no wonder that the young equine entrepreneur has rallied people to her cause — Mona’s passion for horses is beautiful and contagious.

In talks and presentations, she raves about the incredible gains of working with horses and how they can have a positive impact on young people, and mental and physical health.

“I wouldn’t be the person that I am today without horses,” Mona affirms. “There is more and more research coming out about the benefits, especially around “horse girls” and the development of leadership skills.”

As a small child of 5 or 6, Mona was already handling really difficult horses and executing the intense manual labour that comes with caring for them.

“You have to be really sure of yourself otherwise the horse will never trust you which can be dangerous when you are dealing with such a large animal,” she says.

“Its a lot of responsibility so you’re really building character from a young age.” 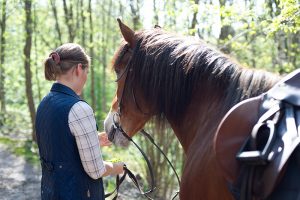 Anyone who has spent a little time around horses will understand what Mona means when she says that the amazing animals “can feel your energy.”

“They help you develop a very strong sense of self and make you aware of how you’re behaving.”

Mona believes that as well as developing her confidence and leadership skills, horses have helped her perfect a valuable mindfulness practice.

“I have worked with a lot of very sensitive horses like Victoria — she really impacted me.”

“If I came to the stable with good energy, calm and happy, she would be so pleased to see me and gallop straight to the fence and be the sweetest horse in the world. But, if I came with negative energy, annoyed, or in a rush, she wouldn’t even look at me and would literally run away.”

“It became clear that I had to be mindful, check my energy and be aware of how I am affecting the people and animals around me. This self-awareness has really helped me grow as a person and especially to navigate the stresses of being an entrepreneur.”

To achieve their goal of making horses more accessible and affordable, as well as their EquiBooker digital platform, EquiConnector does a lot of consulting for equestrian centres, helping with things like expansion, optimisation and grant applications.

They also do lectures, presentations and courses on how equestrian centres and riders can grow and better market their business, which Mona says is a really overlooked area.

“There’s nobody in the Norwegian equestrian industry looking at how to market horses,”  she says.

“Often, when applying for grants, horse people don’t get taken seriously. EquiConnector is encouraging equestrians to think bigger in these situations and demonstrate how an expanded stable, for example, can impact youth, benefit the local community and bring revenue to local businesses.” 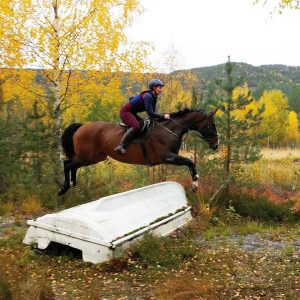 Mona is also one of the founders of a Norweigan equestrian network, because “nobody in the industry talks to each other.”

“We do events to really force people together. In our network, there are people involved in so many different equestrian sports. We want to show people that riding is not just trotting around an arena.”

EquiConnector works with people into showjumping, dressage and natural horsemanship but also those into more niche activities like mounted archery and Russian trick riding.

“There is diversity in the equestrian industry and it’s a serious business with so many benefits.”

Mona wants people to know that being into horses doesn’t have to be ride or die.

“There are so many different ways to do it,” she says.

“Of course, for a lot of people, it’s a lifestyle but we want to show that it doesn’t have to be.”

“Anyone can benefit from spending some quality time with horses, and with EquiConnector we are making that possible.”

For now, EquiConnector is focused on expanding in Norway but Mona’s sights are set on connecting the seven million horses in the European Union to riders and people who just need a bit of horse therapy.

SmartTrade, the Payment Processing App Created For and With Small Businesses

Photo via EquiConnector
“Horses don't care if you have a degree or whether you're sick, who your parents are or what you look like. They just see you in the moment and they just react to how you're being at a much deeper level.”

“I really believe they can see your true self.”