Merritt Moore is showing the world that the arts and sciences are not mutually exclusive.

A true force of nature, Dr Merritt Moore has achieved what most would deem impossible by the age of 32. Not only is she an academic quantum physicist, but she has also found the time to professionally pursue her passion for ballet dancing.

Known to some as “The Quantum Ballerina,” Merritt uses her two seemingly disparate passions to advance each other.

At school, she was encouraged to choose one, but she simply couldn’t and threw herself into both.

While getting her degrees in quantum physics from Harvard University and the University of Oxford, she was performing with companies like the Boston Ballet, English National Ballet and London Contemporary Ballet Theatre.

She managed to balance her two passions but still felt the constant pressure from peers to choose one thing to be good at.

These are astronomical achievements for anyone but throughout her studies, Merritt was switching lab coats for leotards often putting in four hours of dance a day after spending eight hours peering down a microscope. 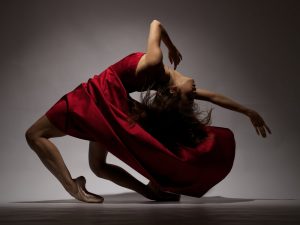 Top: Merritt for BBC’s Astronauts: Do You Have What It Takes? Bottom: Merritt dancing

While Merritt might make her incredible feats look easy, “It’s definitely hard work!” she asserted in a Medium interview.

“One year, for instance, I was performing La Bayadere and double shows of Nutcracker with Boston Ballet (47 total in a month!). I took that fall semester off because it was too much to juggle classes and performances, but I was still working at the Harvard physics lab. In between shows I would throw off the pointe shoes, rub the makeup off and jump in a cab. Once at the lab, I had to get dressed in full-body gear, booties, double gloves, face mask, hair mask, goggles, etc, work on the experiment for a couple hours then strip all the lab gear off and then put on makeup and false eyelashes hurriedly in the back of a bouncy cab ride, jump into my tutu and make it just in time before the curtains would go up.”

Merritt has gone on to be a Forbes 30 Under 30 winner and has also appeared in BBC’s Astronauts: Do You Have What It Takes?

She is a firm advocate that “the arts and sciences should not be mutually exclusive,” and she dedicates time to inspiring young women around the world to pursue their dreams.

Merritt wants other girls to get into physics but says she finds the way the subject is taught frustrating:

“It starts with incredibly boring topics like ramps and pulleys, then puts a lot of emphasis on memorising and regurgitating facts,” she told Malala Fund’s Assembly.

“It’s incredibly isolating and there is an assumption that students should learn on their own from a textbook. I think there would be many more incredible female scientists if it was taught in a more collaborative way that emphasised imagination and creativity.”

This is why she set up SASters (Science-Art-Sisters)—“to encourage young girls to think and visualise science in a different more creative way.

In interviews when she has been asked what advice she would give to anyone pursuing their passions, Merritt often refers to Newton’s 3rd law of motion — for every action, there is an equal and opposite reaction.

“Everything you do inevitably circles back. All the work and intention you put into a dream will pay off — not always in the way you think but in a just as exciting and rewarding way.”