Melati & Isabel Wijsen: The Sisters who Got Plastic Bags Banned in Bali

These teenagers are proving that "kids can do things." Really important things that might just save our planet.

In the last decade, we have seen a huge rise in youth activism, or at least our exposure to it. It almost seems like kids are the ones out there doing the most to solve the world’s greatest challenges.

They know that they are the future and earlier generations have put them at a huge economic and environmental disadvantage, so they are trying to fix it. What if children could change the world?

Two Indonesian/Dutch sisters, born and raised on the island of Bali are changing the world.

Melati and Isabel Wijsen were just 10 and 12 when they started to pitch in on the plastic problem in their region. In a World Economic Forum video, Isabel recalled hanging out on the beach with friends being joined by a big pile of plastic and swimming in the sea and feeling a plastic bag wrap around her legs. “It really showed that plastic was strangling us, all the time.”

Indonesia is one of the countries in the world most weighed down by the plague of plastic.

Every year, an estimated 8 million tons of plastic ends up in the ocean, and Indonesia is the largest contributor to ocean plastic after China.

The Indonesian island of Bali has become a hugely popular destination for expats and tourists. According to the World Economic Forum, Bali produces enough plastic every day to fill a 14-story building.

Here, during the monsoon season, thousands of metric tons of plastic debris wash ashore. The situation was so bad in December 2017 that the local government declared a “trash emergency” on the island’s most popular tourist beaches.

In 2013, Melati and Isabel decided to be the ones to make a change and founded Bye Bye Plastic Bags (BBPB). 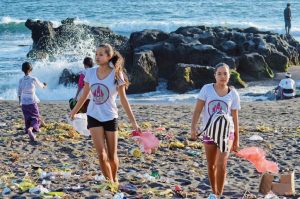 The sisters, now 18 and 16, went and spoke to schools, festivals and markets and organised beach clean-up initiatives.

To convince the governor of Bali to meet with them, they even went on a hunger strike. Two days later, they got their meeting and his signature of support.

6 years after starting BBPB, the sisters have finally got what they have been asking for and in June 2019, the island banned single-use plastic bags, straws and styrofoam.

They know, however, that there is still plenty of work to do and banning single-use plastic is simply the first steps.

Educating others around the world and encouraging them to join the fight is what the young eco-warriors are focused on now.

The sisters travel the world giving talks at some of the biggest environmental conferences and have received worldwide media attention.

“I really, really believe that us kids may only be 25% of the world’s population, but we are 100% of the future.” –Melati Wijsen, the older of the two sisters at this year’s National Geographic Festival.

BBPB now has 35 teams of volunteers around the world and has spoken to around 45,000 students.

They want to continue to spread the message that children have the power to change the future.

“Our entire team, locally and globally are all middle-school students, high-school students and university students. So we really want to embody the message that kids can do things, and so naturally our next project we’re hoping to launch within the next two months is YouthTopia, where we believe empowered young people can accelerate change,”  said Melati.

She recently graduated from high school one year early and has been honoured by TIME as part of the annual list of most influential teens in the world along with CNN Heroes Young Wonders.