The game, Salaam, puts players in the shoes of refugees. Mayen is now raising funds on Kickstarter to launch the next version of the game on Facebook.

Refugees fleeing violence face serious hardship on a daily basis: hunger, dehydration, malnourishment, sickness, and lack of resources. Even if they succeed in reaching a place of relative safety, they face ongoing problems with rebuilding a life in a totally new and potentially unwelcoming environment.

People around the world can understand these problems intellectually but may struggle to connect with them emotionally. The response to ongoing violence in Sudan, in which at least 128 people have died in a matter of weeks amid a military uprising, is a case in point. Social media users across the world have turned their profile pictures blue to honour protestor Mohamed Mattar, who was reportedly killed by a powerful paramilitary group while attempting to protect two women. While these social media users are doing good by standing together to encourage the world to take note of the situation in Sudan, are they really empathising with those in danger? Something imperative to encouraging outside intervention when needed, and to pressure leaders to bring about peace and change.

Lual Mayen, a 24-year-old former refugee from South Sudan, has a solution. The programmer’s “thrilling, high tension runner game,” Salaam, aims to put players in the shoes of a refugee as they endure the hardships refugees experience on a daily basis.

Mayen was born in South Sudan at a camp for internally displaced people, close to the border of Uganda, while his parents were fleeing violence.

In 2011, South Sudan gained independence from Sudan and many people who had fled previous violence returned. But hopes for peace were short-lived: war broke out again, killing over 300,000 people and displacing 2.5 million others.

“My relatives who returned were all killed during the war. There was no peace in South Sudan because of the continued fighting and never-ending cycle of war. Our only hope was to continue our lives as refugees,” explained Mayen.

From a young age Mayen utilised all he had, going to school to make sure he made the most of his difficult situation. His mother was supportive of his computer programming obsession and saved for three years to buy a laptop for him. He was the only kid in the refugee camp to have one.

“I walked three hours every day to an internet cafe to charge it. It was this determination that led me to build my first video game, Salaam.”

After launching Salaam in the refugee camp, Mayen’s story was picked up by several influential game developers, media outlets and programs supporting peace-building efforts. Just months later he was granted a visa to travel to the United States to build games that could make an impact.

He began travelling the world, sharing his story at conferences, and in 2018 he became Global Gaming Citizen, an award sponsored by Facebook Gaming and The Game Awards that honours one individual using the power of games to build community and bring about positive change in the world. 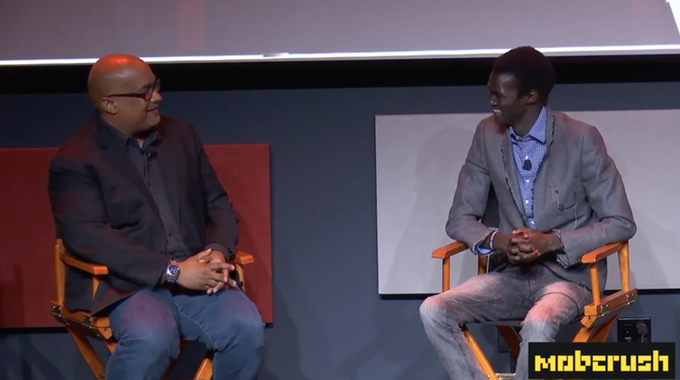 Salaam begins with a caravan of refugees trying to make their way to safety. While the setting is peaceful, the circumstances make the situation feel desperate. Parents are carrying their children and the elderly are trying their best to keep up with the group.

As gun shouts suddenly sound in the distance your character crouches to avoid incoming fire — panic ensues. A military van appears and your character turns to sprint down the nearest path — the game begins!

Salaam is a runner game similar to the wildly popular mobile game Temple Run, but instead of escaping from an ancient ruin, the player must escape war in the world’s most unforgiving conflict regions.

Players must run through war-torn areas to find refuge while keeping watch for hidden dangers along the path. The game requires alertness and quick decisions to avoid hazards such as a fork in the road or a lion in the grass.

“Players will learn about hardships that refugees experience on a daily basis: hunger, dehydration, malnourishment, sickness, and lack of resources,” says Mayen.

“By educating players about the harsh conditions that millions of refugees endure every day, the game will place players in the shoes of another who is less fortunate and showcase the power of empathy.”

Like many of the popular free games of today, users eventually reach a limit and must pay to continue playing. But with Salaam, when the character runs out of energy the player can choose to continue running by purchasing supplies — food, water, medicine — and each time a player does, real supplies will be sent to a refugee in the real world.

“Through partnerships with non-profits and NGOs, Salaam will bridge the real world and the virtual world to provide food, water, and medicine to refugees all over the world.”

The next version of Salaam sees Mayen teaming up with Facebook Games and he is now raising funds on Kickstarter to complete the game’s development.

Mayen plans to debut the new game in December of 2019.