Zipping through central Madrid, at least in the times before Coronavirus**, you could sometimes catch a glimpse of Owl, Heron, Flamingo, or Bald Eagle.

These are the names of the cyclists from local cooperative La Pájara, which has established itself in the Spanish capital as an ethical alternative to multinational rider companies like Deliveroo, Glovo and Uber Eats. The small but committed team does the same work — receiving orders via an app, delivering takeaways, distributing messages — but does so in a way that is fair and collaborative.

La Pájara riders are paid a wage, rather than by order, meaning they don’t need to risk their lives to maximise the number of jobs they complete a day. There’s paid leave for the riders if they’re ill, or have just had a child. There’s no pernicious ranking system that can destroy someone’s earning potential, either because they decide not to work at the weekend or receive a bad review from an unscrupulous customer.

All of which helps to address our intensely unhealthy relationship with food delivery. By downloading an application, someone can sit in their living room and place a food order, expecting to receive it, warm, within 45 minutes. There’s no sense that there are people on the other side of the transaction. No-one gets physically paid for the work they’ve done, as everything is settled in-app through an online payment. This takes the humanity out of the delivery, and crucially for La Pájara, prevents people from realising that delivery is a service that must be paid for.

That’s part of the reason why there’s also such a disconnect between how large rider companies see their riders, and how the riders see themselves in that relationship. While the ‘plug in and play’ flexibility is useful for some, occasionally in need of extra cash, many riders and their families are wholly supported by the work. Some riders take home around a thousand euros a month for 10 hours of work a day — from which, in Spain, they have to pay a monthly quota on top of taxes for the right to be freelance, which slides up incrementally from 50 euros to 300 euros a month. Many are vulnerable, unable to challenge the conditions of pay dictated by companies predicated on competitive insecurity: Glovo, for instance, has just used the Coronavirus to slash how much riders are paid per delivery — by as much as 60% in some places.

“La Pájara was born, mainly, because we worked for Deliveroo,” Martino, also known as El Buho (The Owl), told Global Shakers at the end of one of his shifts, after he’d had a chance to sit down, eat something, and relax. “We protested the conditions, went on strike, and then were fired from those platforms.

“We decided to create something more democratic. More horizontal, in which we could control things.” 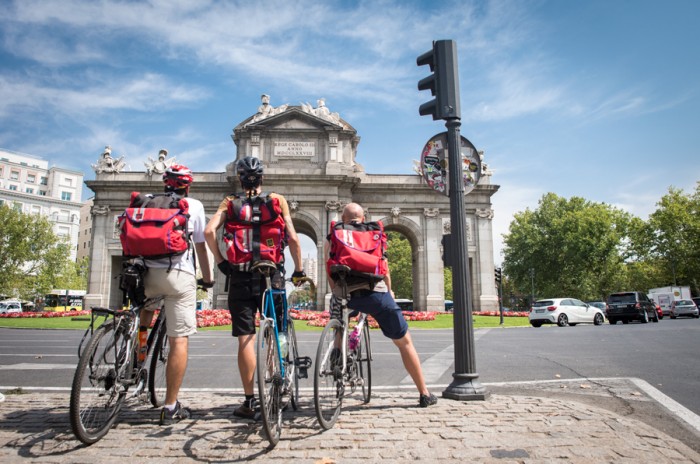 La Pájara got its start in September 2018 with help from a cooperative accelerator, and later MARES Madrid, a social organisation that helped the community-led project develop from a rider-rights campaign (RiderxDerechos) into the cooperative. Key too was the connection to Coop Cycle, a French initiative that developed the app customers now use to register and order food. Mensakas, a Barcelona-based rider coop also supported by Coop Cycle, symbolically pays its female riders 5% more than men to tackle the gender pay gap.

La Pájara has now stabilised at around 300 users, with 150 orders per month from 13 partner restaurants. These are mostly vegetarian and vegan sites, including Refusion Delivery, in which refugee chefs from Venezuela, Sudan and Yemen cook food from their home countries.

But it hasn’t been an easy ride. Attracting new users is difficult for both food delivery and message delivery, as most places “have something internal or already had a system.” Part of the issue is reach: any restaurant that wants to compete is all but forced to engage with major rider platforms, which have a heavy advertising presence. As major delivery sites demand 50% of the cost of producing the meals, this inevitably leads to squeezed margins and a need for the restaurant to increase the prices of their dishes — a cost usually then passed on to the individual.

La Pájara wants to make a crooked system fair. It wants all three elements of the transaction to be valued equally: top-quality cooking: efficient but enjoyable transportation, and a great meal for the customer – – all at a fair price.

Crucially, Martino told GS that if home delivery is not charged, it can seem like the delivery is not a service they’re benefitting from. “We said no, you have to pay 1 euro, 2 euros, for the delivery service, because people have to realise that it’s us on the streets, in whatever weather happens to be going on, working to arrive in 45 minutes — which is nothing — with the food still hot. Minimum.

“We believe — we want — to continue like this with the restaurants we work with.”

La Pájara’s plan is to remain sustainable, continuing to work with local and European-level networks facilitated by CoopCycle. There’s also a fundamentally cooperative nature: La Pájara wants to support other projects with similar aims in other parts of aims that they realistically wouldn’t be able to reach.

“It’s clear that cycling has its limits, but we have to open our eyes to the many positive effects: less traffic, pollution, stress and accidents, and more space and health,” La Pájara told the paper El Diario. “And on a social economy: it’s a way to take out intermediaries and to step dehumanising everything, to create networks for collaboration — to better share the benefits.”

** La Pájara is not delivering food during lockdown, but has begun delivering messages again. More information on their website.

‘Adopt a Grandpa,’ the Charity Trend Sweeping Spain and Portugal