KitKat is Ditching Plastic Packaging. And It’s Thanks to These Experts

A new paper design has launched in Japan, encouraging buyers to keep their packaging and turn it into an origami peace crane.

In January 2018, food and drink giant Nestlé, the company that makes KitKat, announced what seemed to be a small corporate change: Work by The Chocolate Centre of Excellence in Broc, Switzerland, would be taken over by the Product Technology Centre for Confectionery in York, UK.

Nestlé has just pledged to remove plastic packaging from all of the wrappers on its KitKat sweets and replace them with paper by 2021. The paper form has already launched on some types of KitKat in Japan, with buyers urged to keep hold of the paper and use it to make origami peace cranes. 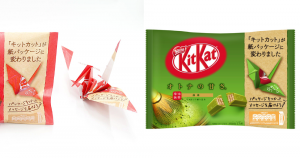 It’s come about because of an innovation in the “high speed flow wrapping process”, which allowed Nestlé to use recyclable paper — initially for its YES! range of fruit and nut bars, and now the KitKats.

Developed by — you guessed it — the experts at the Product Technology Centre in York.

The R&D centre has reportedly found a way to use recyclable paper in a high-speed ‘flow wrap cold seal’, which the experts say is a world-first.

“The challenge for experts was to find a way to use paper on high speed production lines that have been designed for more durable plastic or laminate packaging,” a spokesperson told The York Press.

“The new wrapper then had to be tested extensively to make sure it would keep YES! bars in perfect condition during production, transport and storage.”

The idea is that the paper remains in use, for longer. Current flavours included are original, matcha, and Japan’s version of a bitter, dark chocolate taste called otona no amasa, or “sweetness for adults”.

It’s unclear where the paper will be sourced from in Japan. But in the UK, the paper was from sustainable sources certified by the Forest Stewardship Council or the Programme for the Endorsement of Forest Certification.

Yes, it’s fortunate timing, coming just as Nestlé was reeling from yet another scandal — this time about bottling and selling natural spring water in California that it had no right to touch.

But the company is enormous, and its actions could lead to changes among other food and drink organisations. Fastcompany reports that the company made $21.7bn from its drinks division alone last year, and that Nestlé’s plans to make 100% of its packaging for sweets and chocolates recyclable by 2025.

It’s Nice That estimates that the initiative will save 380 tonnes of plastic every year.