In a rather strange turn of events, KFC, the fast-food chain that brings us buckets of fried chicken, has announced the release of a free dating simulator game called ‘I Love You, Colonel Sanders’ on Steam.

The peculiar but perhaps, smart, marketing ploy comes just after the great chicken sandwich war of 2019 that saw KFC’s rival fried chicken shops, Popeyes and Chick-Fil-A battle it out on Twitter. The ‘war’ (which was actually started by Chick-Fil-A) led to a huge sales spike for Popeyes with Google searches for the company increasing by 1000 percent, chicken sandwiches shortages, and lines of over 45 minutes.

Now, KFC has made a dating simulator game featuring a young, chiselled and jacked-up Colonel — the famed creator of KFC and the guardian of the company’s secret “11 spice recipe” that makes their chicken so “finger-lickin’ good.”

“Do you have what it takes to win the heart of the most famous chicken salesman of all time?”

The game puts players in the shoes of a “promising culinary student” studying alongside a “datable” Colonel Sanders, and players must impress him and first become his business partner and eventually, much more.

Throughout the game, players will be faced with life-changing decisions that will affect their chances of friendship and love. 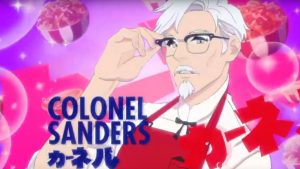 It features 9 ‘lovable’ characters, one of which is Professor Dog, a corgi that takes the role of the Colonel’s best friend and confidant. Also featured are rivals with whom “cooking battles” and “battle battles” will take place.

The game’s design is strongly rooted in anime and the overall Pokemon-like look and feel of the whole affair will surely be nostalgic for older millennials of the Pokemon era.

KFC says there are multiple hours of gameplay, a secret ending, plenty of “cute miniature food” and recipes.

The game was born of KFC’s marketing budget but developed by Psyop, a little games studio likely best known for Camp W.

A Colonel Sanders dating game might seem like a super weird marketing strategy for the company, but let us not forget that KFC released a Colonel Sanders romance novel in 2017.

“Do you have what it takes to survive culinary school? Will Colonel Sanders choose you to be his business partner? Or maybe even so much more?”

KFC says that the game will be available for download on 24 September 2019.