The renowned economist's response to the lure of eternal growth is a circular economy concept focused on wellbeing and caring for the planet.

It’s a radical thing, a doughnut. Especially in the hands of someone as committed to human and environmental wellbeing as economist Kate Raworth.

The lecturer at Oxford University has spent the past decade developing and refining her revolutionary ‘doughnut economics’ concept, which challenges an almost religious commitment to economic growth in the modern world. As she puts it in an engaging TED talk:

“Except, it turns out, it doesn’t, and it won’t. We need economies that are regenerative and redistributive by design.”

Her doughnut instead sets out the conditions for using the world’s resources to provide good lives for people without destroying the planet. 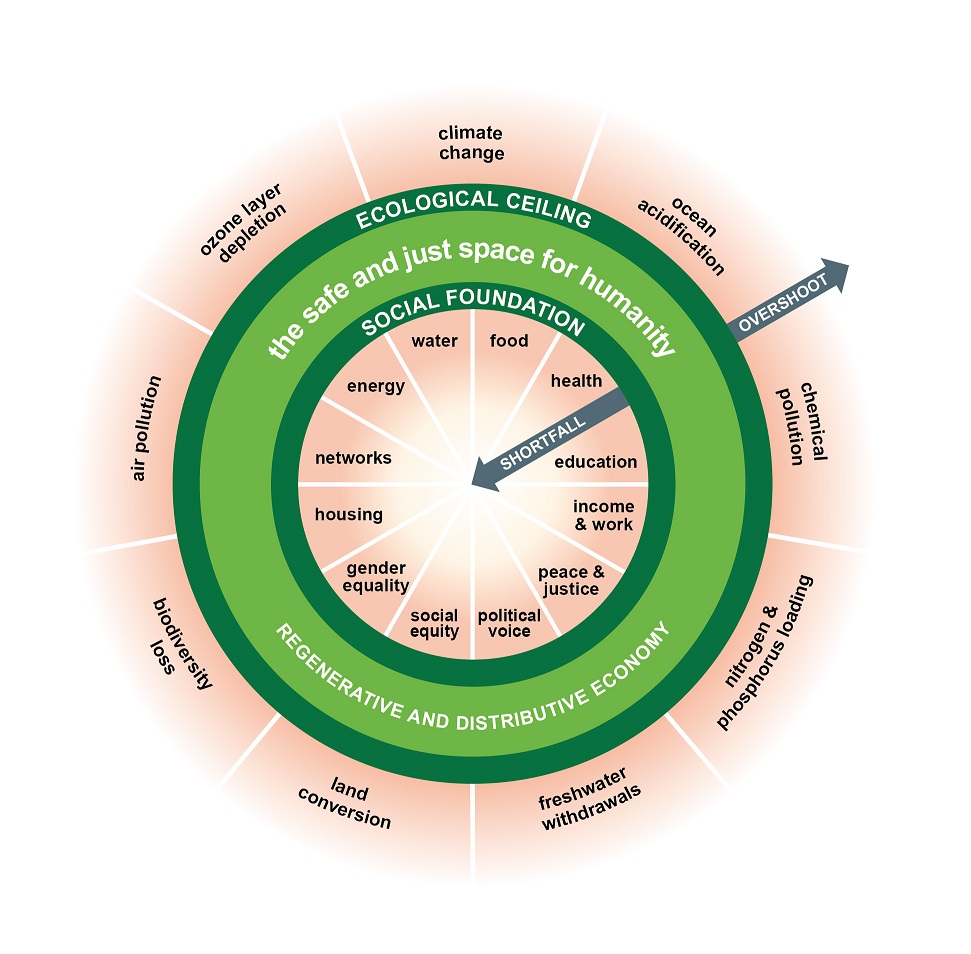 In essence, people mustn’t be allowed to remain in poverty, without electricity or enough food — in the middle of the doughnut. Equally, we can’t continue expanding and generating dangerous planetary or biodiversity damage — moving beyond the sprinkles.

Instead, our world must stay within the dough.

This month, Amsterdam became the first city to commit to using the theory as a way of organising city life to rebuild post-Coronavirus.

The Dutch city, while very advanced by many standards, still sees almost 1 in 5 residents unable to cover their basic needs after paying rent, and low rates of acceptance for social housing schemes.

The city is working on a financial system that doesn’t profit from undermining and destablising human wellbeing. It’s looking at building more houses in a more sustainable way. It’s looking at renewable energy in the city, and its relationship with large goods importers, who may be involved in exploitative labour practices on the other side of the world.

“When suddenly we have to care about climate, health, and jobs and housing and care and communities, is there a framework around that can help us with all of that?” Raworth tells The Guardian. “Yes there is, and it is ready to go.”

Raworth’s doughnut is the result of a lifetime of study. In a talk from 2014, she explains that she pursued economics at university in order to speak “The Mother Tongue of Public Policy.”

But she was disillusioned by the common understandings in the discipline — that the environment isn’t important and that unpaid work isn’t valuable.

So she sought out the real world, working in the villages of Zanzibar, and then at the UN, and then at Oxfam.

In the middle, she immersed herself in the “bare bum economy” of raising infants.

All of which thrust her back to economics — making her question what would happen if economics didn’t start with money, but started with human wellbeing.

In designing a system that would provide a safe space for humans to exist, using enough planetary resources so that we survive and thrive, but not so much that we destroy the environment, she confronted the idea of impossible, endless growth.

And ended up with the image of the doughnut.

“I know this way of thinking about growth is unfamiliar. Because growth is good, no? We want our children to grow, our gardens to grow. Yes, look to nature and growth is a wonderful, healthy source of life,” Raworth says in her TED talk.

“But look again to nature. Because, from your children’s feet, to the Amazon Forest, nothing grows forever. Things grow, they grow up, and they mature and it´s only by doing so that they can thrive for a very long time.”

She continued: “If I told you my friend went to the doctor who told her she had a growth, that feels very different. Because we intuitively understand that when something tries to grow forever, within a healthy living thriving system, it’s a threat to the health of the whole.

“So why would we imagine that our economies would be the one system that could buck this trend and succeed by growing forever?”

In the popular TED talk, Raworth’s conclusion is simple. “We have economies that need to grow whether or not they make us thrive.

“And we need economies that make us thrive whether or not they grow.”