If you want to feel insecure and in need of a total body reformation then look no further than Instagram. Even if you’re not following those types of influencers — the ones that have washboard abs, gleaming hair, the perfect pout and unnervingly white teeth — there is still little chance of escaping the window into their seemingly ‘perfect’ lifestyles.

There is big money in projecting perfection and until quite recently, influencers could cloak their paid promotion posts in the guise of a friend that just wants to let you in on the big secret — that one product that magically melts away fat or stops you being hungry, ever.

Instagram changed the rules so that influencers had to clearly state in their posts if it was a paid promotion or an advertisement, but the damage has already been done.

The nature of Instagram — the culture of comparison, seeking approval from likes and displaying only the best and beautiful moments of life — has led to a sharp rise in mental and diet-related illnesses, especially among the young and impressionable.

The Centers for Disease Control and Prevention estimates that there are 23,000 emergency room visits every year in the U.S. as a result of dietary supplements. More than half of these incidents in young people aged five- to 19-years-old are due to weight-loss and energy supplements.

Jameela Jamil, through her body-positivity ‘movement’ i_weigh, has been clapping back at those continuing to plug unhealthy and unobtainable lifestyle choices to their predominantly young, female fanbase to cash in. Her efforts are now finally paying off in a big way that matters.

‘The issue is at its peak because, in my day, you’d have to search for ages to find this toxic information, but now it finds you because of algorithms that know your age, sex and what you’re into,’ Jamil explained to Elle UK. ‘Therefore it’s the worst it’s ever been. Teenage suicides, eating disorder rates, the amount having cosmetic surgery and committing self-harm – they are all at the highest they’ve ever been. There’s no way this isn’t a correlation with what they’re being exposed to online.’

Jamil, who herself has suffered from mental illness and the insecurity of not living up to the standards of celebrity started i_weigh last year to provide a respite for scrollers from their feeds of fake flawlessness. What really gets her riled up is the widespread celebrity endorsement of diet brands.

‘The Good Place‘ star famously branded the Kardashian clan as having their “pockets lined with blood and diarrhoea” after selling shakes and appetite-suppressing lollipops to their following. 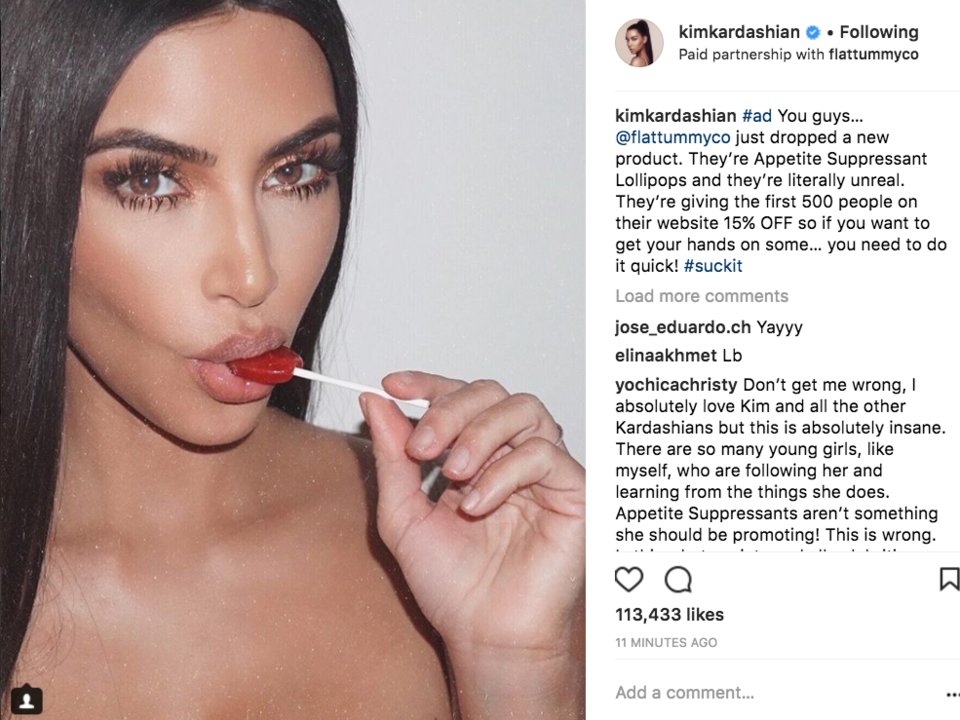 In what is a huge win for Jamil and i_weigh’s large community, Instagram is tightening up its rules around influencers touting weight-loss products and cosmetic surgery.

The social media channel made the announcement in partnership with Jamil yesterday. “After a bunch of shouting, screaming, and petitioning… we have managed to get the attention of the people at the top, and they have heard us and want to protect us,” she said.

“It [the new rules] sets the tone that this is not ok in our society,” she told Elle UK. “We have hyper-normalised flogging nonsense to young impressionable people. These people are selling hair growth gummies, but wearing extensions or photoshopping themselves to look slimmer and selling a weight loss shake. There are so many lies being told and we’ve accepted that as a cultural norm.

“For huge corporations – who are the main access points for these companies to sell their products to young people over the internet – to say they don’t condone this sends out a huge ripple across the earth. It says that if giant corporations are willing to take a stand against this then it must be really serious.”

THIS IS HUGE NEWS. @i_weigh are changing the world together. After a bunch of shouting, screaming, and petitioning… we have managed to get the attention of the people at the top, and they have heard us and want to protect us. And this is just the beginning of our efforts. As of now, if you’re under 18, you will no longer be exposed to any diet/detox products, and for all other ages; all fad products that have bogus, unrealistic claims will be taken down and easy to report. I’ve been working with Instagram all year towards this, who were amazing to deal with, and they expressed that they passionately care about creating a safer space for us all online. This happened so much faster than I expected and I’m so proud and happy and relieved. WELL DONE to the many people who have been working towards this huge change. This is a mass effort. This is an extraordinary win that is going to make a big difference. Influencers have to be more responsible. ❤️

Instagram say they listened to Jamil and other campaigners while also gathering community feedback, speaking to youth specialists and working with experts like Dr Ysabel Gerrard, a lecturer in digital media and society at the University of Sheffield, to formulate this policy change.

Over the next few weeks, Instagram will roll out an additional function so you can report a post if you think it violates the new guidelines.